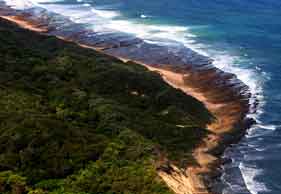 It all started back in 1975 when local runners and surfers in East London started a friendly race from the Kwelera River in Yellow Sands to Nahoon Beach in East London. Having not faired as well as some of their road running friends in a road relay from King William’s Town to East London, the local five-man surfing team came in for a fair bit of ragging. Seeking retribution, the surfers issued a challenge to the runners to meet them on their turf – the beach – and set about planning a route taking in the sand, rocks, loose boulders and rivers between two points. It was a test of fitness and bragging rights, and for the next 39 years, has been a top attraction in the area.

This February, a field of 3 300 athletes lined up for the start of the gruelling 17.45km race, with a huge climb in numbers in the accompanying 5km junior race, which was introduced last year. Race organiser Neville Wilkins says the history of the race and it being such a distinctive route makes it so popular: “There’s always been some competition between the runners and surfers. It’s also turned into a great day for the family on the beach.” Discovery Sponsorship Manager, Sandile Mkari, adds, “This is a vehicle for healthy living. We are challenging everybody, also children, to get out of their houses and compete. You don’t even have to be a runner – you can paddle, you can walk – and we see so many youngsters and newcomers to the sport. That’s what it’s all about!”

OUT THE WATER FIRST
This year, the surf-skiers came out ahead of the runners, with Richard Von Wildman coming home in 1:02:29, four minutes ahead of the first runner, Zingisile Marikeni (1:06:30). Nevertheless, Zingisile was all smiles after finishing, despite the toughness of the route. “I feel on top of the world!” he said. “I just wanted to work hard and I knew as a runner competing in this that I had to win it!” The first female runner in was Hanlie Botha (1:16:21), a winner of the event for the third time after she had trailed in third position up to the 12km mark. “The first bit on the rocks was hard and I was shaky, but it became easier as the wind came from behind us,” she said. “I keep coming back because of the crowd support, water points and vibe. This is the race to do in East London!”

Doran Fritz (1:10:14, 2nd male runner): “I have done the challenge for 13 years now and I love it. It’s definitely a good training run for the other races on the calendar. One gets very tired out of the water, but I’m very happy with today’s result.”

Mzukisi Kebeni (1:10:51, 3rd male runner): “I’m very happy about my time this year, even though it was spot on my time from last year. I will come back and improve next year.”

Myrette Filmalter (1:24:03, 3rd female runner): “My Achilles hurt before today, but I knew I wanted to compete and I’m happy I did! The last 4km were very challenging, though. It’s my third time here and I love it. After this gruelling route, you don’t think you’ll come back, but you do.”

Michael Dettmer (1:41:53): “This is my first time at the Surfer’s Challenge as it was on my bucket list for this year. The route was good, even though the rocks take it out on your ankles quite a bit.”

Yongama Mtikitiki (1:35:21): “This is my first race here and I really loved it! I’m looking forward to doing it every year.”

Bruce Fordyce (1:39:46): “It was a cooler day and the wind was coming from behind us, which made today easier. The most challenging bit is dealing with the rocks and pebbles at Gonubie. What makes this race so different is that it is so unique – you go over rocks, the road, sand and rivers. For a road or trail runner, there’s something for you and you will find some strengths and weaknesses out on the run. I’ve done this race for a few years and will definitely be back!”