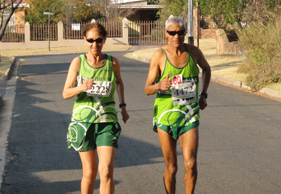 When Don
Charles won the grandmaster title at the 2013 Central Gauteng Cross Country
Champs in August, it was yet another age category win to add to his already impressive collection. In
previous years he has wracked up wins in the veteran, master and grandmaster
categories at top events like the Loskop Ultra-marathon and Cape Town City
Marathon, but Don says the most special victories came in his childhood ‘hometown’
of Soweto. In fact, he has won his category at the Soweto Marathon as a veteran,
a master and as a grandmaster. “These races have meant so much to me, as I have
an attachment to Soweto,” says Don.

When Don
was a little boy, he looked up to his older brother who was always out on the
soccer field, and at the age of eight, Don decided this was the sport for him.
He spent many hours of his childhood doing what he loved most, playing very
competitive soccer in Soweto, and went on to enjoy a successful playing career, but after many years of
playing professionally, he grew tired of the politics in the soccer industry and made a decision to transition
from soccer to the more tranquil world of individual sport, specifically running.

It all
started on a Friday evening when Don heard there was a marathon happening
relatively close to where he lived that Sunday morning. Now he had harboured a
desire to run a marathon at the back of his mind since road running had been
opened to all races in the 70s, so that Friday he decided he would go and run
on the Sunday.

“I never
really knew what a marathon was and what the distances were, because road
running had been strictly for white people only for the longest time. Still, I
was prepared to run the marathon based on my soccer fitness,” says Don, who
duly arrived at the start line in his casual ‘tekkies.’ “By the time I got to
10km I realised this was pretty far. When I got to 15km, I asked the fellow
runners beside me how far there was left to go. When they told me we weren’t
even halfway, my enthusiasm dwindled, and when I got to 27km, I called it
quits!”

Despite
such a negative first experience of long distance running, Don had still
enjoyed the race, so he decided to try again, but this time he would train properly,
having realised that his soccer fitness was only a base for this type of
endurance sport, and that he needed to put in more training before taking on
another marathon. Once he began serious training, however, Don proved to be a ‘natural,’
and his competitive nature soon earned him podium positions, and later many age
category wins.

Initially,
Don had a regular training partner, but when he grew tired of the sport and
threatened to quit, Don started hassling his wife, Muriel, to also take in his
much loved new sport. Muriel had no interest in running, but decided to humour her
husband, but little did she know that she would also prove to be a natural and become
a competitive age grouper! So these days, the Charles couple regularly do a
double sweep of the men’s and women’s grandmaster categories at races up to
half marathon distance. “Don is always training me,” says Muriel. “We like to
do some training sessions together, when our schedules allow it, and we also do
a lot of cross-training, which includes Boot Camp and gym work.” Their two sons
are also sporty, one being a runner and the other a cyclist. Meanwhile, Don’s
next big goal is to ride the Momentum 94.7 Cycle Challenge with his son later
this year. He may just prove a natural at that as well…