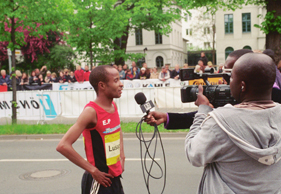 Back in May 1986, Willie
Mtolo and the late Zithulele Sinqe fought an almighty duel in the SA Marathon
Champs race in Port Elizabeth. Sinqe’s winning time of 2:08:04 was the fastest
ever by a South African, with Mtolo’s 2:08:15 second on the list, and their
performance really made the rest of the world sit up and take notice. “Globally,
only the Australian Rob de Castella, with his 2:07:51 in Boston, was faster
than Sinqe that year,” says SA athletics statistician Ri?l Hauman, current
editor of the South African Athletics Annual.
“Even though both the Boston and PE courses were considered assisted due to the
overall drop from start to finish, Sinqe and Mtolo were right up there in the
world rankings of the time.”

However, it took more than
11 years for another South African to go faster than Sinqe, when Josiah
Thugwane ran 2:07:28 in Fukuoka, Japan in December 1997. And since 1986, only
four SA men have managed to go faster than Sinqe: Thugwane, Gert Thys, Hendrik
Ramaala and the late Ian Syster – and Thys set the current SA record of 2:06:33
in Tokyo as far back as February 1999. Similarly, amongst the women, the days
of Elana Meyer, Colleen De Reuck and Frith van der Merwe are somewhat a distant
memory. In the 90s these three athletes ran 14 sub-2:30 times between them, but
we had to wait until Rene Kalmer’s 2:29:59 in 2011 for another SA woman to
repeat that feat.

“If you look at the global
marathon statistics, the world is getting better at a terrific rate, but South
African standards are not improving. SA has stagnated,” says Ri?l. “And for
that reason, we selected a 41-year-old Hendrik Ramaala to go run the marathon
at the World Champs this year. Yes, he made the qualifying time, but he is past
his best racing days now. The problem seems to be that there are few younger
athletes of the same calibre coming through to take over from him.”

In the past year, South Africa’s top male and
female marathoners were substantially off the global pace overall.

Ri?l believes that a
combination of interlocking factors is responsible for not only this lack of
marathoning depth in SA, but also the overall disappointing performances by South
African athletes in global track, road and cross country events:

1 Lack of season structure
and planning.

3 Lack of money and support
for athletes.

4 Over-racing, moving up to
marathons too soon and over-importance of ultras.

5 Lack of proper coaching
structures and guidance for athletes.

“I see athletes all over
the country racing too much, weekend after weekend. They don’t peak for a big
race, they just race at the same level all the time, and I know it’s a question
of money for many of them, as they need to put bread on the table. Also, many move
up to marathons and ultras too soon, when they should ideally gradually build
up distance over a few years, focusing first on speed and strength on the track
and in cross country, then step up to 10km on road, and only much later move up
to half marathons, still later the marathon, and only much later the
ultra-marathons. But we all know the big money is in the marathons and ultras,
and that is where many young athletes go.”

Ri?l points to the success
of UK Athletics at the 2012 Olympic in London as a model which SA would do well
to learn from. “If we can get our season planning right and get a proper
coaching structure in place, with a national coach in place and coaches at all
levels working together, from grassroots to Olympic level, as they did so
successfully in the UK, then we can turn things around. And with more money we
can help athletes like Stephen Mokoka with a 2010 PB of 2:08:33 and Lusapho April
on 2:09:25 in 2011 to focus on the Olympics and World Champs, and then we could
see our marathoners challenging the world’s best again.”