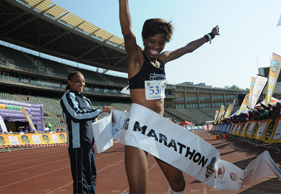 This really has been Mapaseka Makhanya’s year! So far
in 2013, she not only did the double at the SA Senior Track and Field Champs by
winning both the 1500m and 5000m titles, she also set new personal bests for
800m, 3000m and 5000m. Then she shifted her focus to national Spar Ladies 10km
series on the road once the track season was over, winning the Durban leg in PB
32:49, breaking the course record in Pretoria, and finishing second in Cape
Town and third in Port Elizabeth. With just the Johannesburg leg to go, she has
all but won the Spar Grand Prix competition, as she is now 29 points ahead of
Irvette van Zyl, and she is confident she can win in Jozi as well. Then, to top
it all off, in early September she also ran her debut 42km at the Gauteng
Marathon, cruising home in 2:37:06 to record the second-fastest time by a South
African woman this year.

“I’ve always had that winning mentality. My coach,
Lungile Bikwani, has made that a part of who I am now,” says the Sowetan
speedster. “I’ve got the results and I’m happy, but I know that I can go
faster!” And while many still identify her with middle distance events on the
track, Mapaseka is happy to embrace new challenges in the sport she loves. “The
track will always be my home and where I’m comfortable, but I know now that I
have a future at road running,” she says, “all it takes is the same dedication
and enthusiasm that I’ve had at training all these years.”

Running has always been a part of Mapaseka’s life. At
school, she took part in cross-country and track events, and that continued into
her student years at the University of Johannesburg. In her teens, she
represented South Africa at the World Youth Champs, World Junior Champs and
World School Games, and while her coach pushed her throughout her teen years,
taking the ladder to senior level competition was difficult. “At that point, I
was just happy to be a part of the pro set-up,” she says. “I wasn’t as serious
about it. It was just an opportunity to get a unique perspective on athletics
and how one can make a living out of it. But there’s a development gap in this
country. Between the ages of 19 and 24, there’s a huge difference between the
juniors and seniors, so at first, I wanted to quit when I reached that level,
but my coach pushed me through it and I got a lot stronger.”

Now, the decision to push to longer distances and
leave the track is a bittersweet one for Mapaseka. “Track and field is dying in
this country, so while I still love it, road running is becoming more popular
and there’s definitely a future for me there in the coming years. It’s meant a
different way of training – I’m still on the track a lot for speed, but now I
run the mileage and have to entertain that long-distance mentality.”

As a pro athlete, Mapaseka puts in a lot of time for
training. On Mondays, Tuesdays and Wednesdays, she dedicates mornings to speed
work on the track followed by a short run, with tempo runs and hill sessions
the rest of the week. She rests on Saturdays and uses her Sundays for long
runs. She also does some strength work in the gym. As a track athlete for so
many years, she says she understands the importance of concentrating on speed
work. “I think success is usually guaranteed behind the scenes. It’s those
hours at training. A lot of athletes skip a day if the coach happens to miss
training. Not me… I go back to basics and work hard!”

With a busy training week, she still juggles being a mom
to four-year-old Naledi. “People ask how I do it, but I’m used to being an
athlete mom. You have a routine you stick to, like I go for a run, come back home
and dress Naledi for cr?che,” she says. “There are hard days, but nothing I
can’t handle.” And Naledi is never far from Mapaseka’s thoughts: The proud mom
is well known for her trademark tattoo across her stomach, a chain holding her
daughter’s name, which is seen every time she races. “I remember being so proud
of having my baby that I knew that I had to get that tattoo. Naledi means ‘star,’
and she’s very important to me. She’s always at the finishes and usually wants
to pick up my trophies for me!”

This year, Mapaseka knew she would be taking on road
running stars such as the Kalmer sisters, Irvette van Zyl, Lebo Phalula and Rutendo Nyahora. Her initial goal in
the Spar Ladies races was a top three finish, but she got so much more than she
bargained for. “I think I’ve learnt a lot making the move to the road,” she
says. “The 800m, for example, is quick and hard, but the first time I moved to
a longer distance on the road, I found I had to ‘entertain’ myself and continue
to be positive on the route. As I move on, so will my mind for the distances,
and I usually race as the route goes – if I’m feeling good, I’m feeling good.”
At the Gauteng Marathon, Mapaseka says she really felt the distance in the last
4km as her legs cramped a bit, but she stuck with it. “There was a point at
about 26km I thought I was quite slow, so I picked it up, then cramped a bit
later. It was hilly and tough, but I can only move on to better things now!”

While she’s highlighted next year’s Old
Mutual Two Oceans Half Marathon as a must-run, there’s no stopping her from
attempting the ultra some time in the future, but for the immediate next few
years, Mapaseka wants to go after more track titles, build up her strength on
the road, and then wear the green and gold in the Olympic marathon in Rio 2016.
“I work hard and I have my family support at races and in everything I do,” she
explains. “It’s come to a point where they say, ‘Why didn’t you win?’ if I come
second! Going forward, there’s enough in me to carry on with the bigger distances
and tougher races. I think if any young athlete just works hard, everything
will fall into place in the end. I love running and I’ve just made it work for
me!”