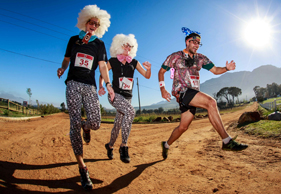 Around 600 eager trail
runners and lovers of good wine made their way to the Blaauwklippen Wine Estate
for the Cellar2Cellar Trail Run & Wine Experience, with the serious racers
first taking on the 20km or 12km trail runs, and then many of them joining the
12km Wine Experience ‘run.’ This took them through the vineyards of
Blaauwklippen, Stellenrust, Dornier, Kleinood, Waterford and Stellenzicht, with
all six participating wine farms, together with a Checkers Odd Bins tasting
station, tempting participants to linger and taste their wine along with
Portobello cheeses, chocolates and Wedgewood Nougats that were on offer.

In the serious racing, Matthew
Daneel took top spot on the podium in the men’s 20km Trail Run in an impressive 1:13:23, followed by Dawid
Visser and William Leslie. Thamar Clark won the women’s 20km in 1:37:03, with Linda Kinco-Smith second and Sarah-Jane
Jackson third. Claudia Wesemann was first woman home in the 12km, clocking 1:01:52, with Yolandi
Visser second and Nicola Collins third. Craig Burns took men’s gold in the 12km with a quick 52:52, with Jacques
Jantjies second.

ON THE LIGHTER SIDE…

Nicola Collins was one of
many runners that did both the 12km
Trail Run followed by the fun-filled 12km Wine Experience. “To just do the 12km or 20km at
Cellar2Cellar would be cheating,” she said. “The whole experience, atmosphere
and the people you meet along the way is just awesome, not to mention the
delicious wine, cheese, chocolate and nougat tasted along the way. I can’t
think of a more fun-filled way to spend a beautiful spring day with friends.”