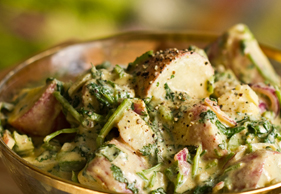 It may come as a surprise to you to discover that one
medium-sized boiled potato with the skin contains about 45% of the daily recommended
value of vitamin C, and as much or more potassium than bananas, spinach or
broccoli. It also accounts for 10% of the daily value of vitamin B6 and trace
amounts of thiamin, riboflavin, folate, magnesium, phosphorous, iron and zinc.

Regrettably, however, we tend to consume potatoes as
oily fries, or potato chips, and baked or boiled potatoes are generally dressed
in fats like cheese sauces, butter or sour cream. To get
the most out of the power of this delicious veggie, it’s important to get rid
of the frills. Instead, we can focus on the three types of potatoes us South
Africans are used to and what athletes need to keep note of if they’re fueling
for a long run or ride.

We are all familiar with the white (or yellow)
potatoes, sweet potatoes and new (baby) potatoes. All of these varieties
contain roughly the same amount of vitamins and minerals per standard portion.
Potatoes mostly differ from one another in their starch content and type, which
affects not only how fast they’re digested, but how they act when cooked.

?
Boiling usually
results in a lower glycaemic index (GI), since starch can bind with water. The
dry heat of baking, on the other hand, lowers moisture and concentrates the
sugar in the potato. Keeping the skin on will also contribute to a lower GI as
the fibre in the skin helps to decrease the rate at which the sugar is absorbed
into the blood after digestion.

?
White potatoes,
whether you have them mashed, baked, as fries or potato chips, have a high GI,
which means that their carbohydrates are quickly turned into sugar, which
elevates your blood sugar levels quickly after they have been consumed.

?
Also known as baby or
creamer potatoes, new potatoes are any potatoes which are gathered young, just
before their sugars are completely transformed into starch. It is due to this
that they have an intermediate GI.

?
Rich in vitamin A and
beta-carotene, the sweet potato offers complex carbohydrates (due to their
higher fibre content) along with antioxidant nutrients. Boiled sweet potatoes
also have a low GI.

There are no two runners on the face of the earth who
are exactly alike, so it is important to keep in mind that what works for one
runner may not work for everyone. It is important to fuel every 45 to 60
minutes during a long ride or run of 90 minutes or more, with around 30g to 60g
(three to four new potatoes) of carbohydrate per hour. Just remember to always
test new fuelling snacks during trial runs or rides.

Out of the potatoes mentioned above, the new potatoes
will do the best refuelling job, as they have an intermediate GI and are easier
to consume and digest – due to their lower fibre content – during a long ride
or run. The intermediate GI will not only provide you with a quick surge of
energy, but will assure that you have sustained energy levels for longer. By
adding a little salt to the baby potatoes, it can become a lovely savoury treat
during a long ride and can also help to replace sodium lost through sweat. New
potatoes can also be consumed as your starch after the race to help with refuelling
of your carbohydrate stores.

Try this simple recipe to have with your lean protein
and fresh vegetables.

Coarse salt and ground pepper (according to taste)

?
Place the new
potatoes in a pot of lightly salted boiling water (1/4 to ? tsp. salt). Cover
and simmer for 15 minutes or until tender, then drain.

?
In a large bowl,
combine the white wine vinegar and Dijon mustard, season with salt and pepper.

?
Add the hot cooked
potatoes and toss all the ingredients together.

?
Add the oil and
parsley to the cooled potato mixture. Season with salt and pepper, and toss.