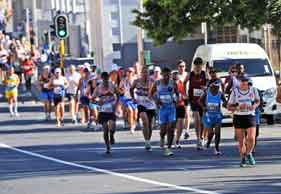 Flat is the new not-so-easy, and do not let anyone tell you otherwise. In this era where off-road training and hill repeats are the new adrenalin sports for running junkies, a flat marathon like this one presents a challenge of a different kind. As for fast? Forget it. Or maybe it’s just old age and a few extra rolls catching up with me…

Other than being somewhat slower than the sub-4 athlete that I’d love to become again, the Peninsula Marathon was a perfectly pleasant run. The race started at the very un-Slaapstad-like time of 5:15am in Green Point – thank goodness, because the 21 degrees of the morning rose by 10 degrees later in the day! – and followed Main Road through to Simons Town Naval Base. Straightforward and simple, I really like a marathon with this kind of consistency, and one that goes from point to point.

There were no hills to speak of, and the first half through the suburbs was somewhat uneventful as far as scenery is concerned. What the crowds lacked in numbers, they made up for in entertainment, from the very happy duo egging us on in Adderley Street before sunrise to the elderly woman (surely an ex-runner) with her whistle in Rondebosch, to those spectators holding up posters saying: “Run like you stole something” and “In the wall is a door.”

At about 12km we crossed the starting line of the Two Oceans in Newlands, and re-tracing the route for a good few kilometres, I was just happy it was a dry day and not pouring like last April. From Muizenberg onwards, the sea views pleased this Jozi girl. It even distracted the attention somewhat from the trouble of having to brave the traffic in the road to overtake all the slow boat half-marathoners who started about two hours after us further along the route. One of my marathoner friends reckons that these people, walking arm-in-arm three or four deep, probably had to do this to support the heavy weight of the snack packs on their backs!

But I reckon if it’s the only exercise they get all year, this outing was an impeccable choice. It was great fun and the twitter crowds went wild. It’s the coolest thing carrying one’s own spectators in your pocket.