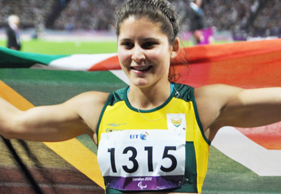 Last year was quite some
year for track and field star Ilse Hayes. Competing in the T13/F13 class for visually impaired athletes, she won gold in the long jump and silver in the
100m at the London Paralympic Games, an exact repeat of her medal haul at the
2008 Beijing Paralympics, to go with the bronze she won in the 400m at the 2004
Athens Games. However, she competed in London despite a badly torn quad muscle,
then in February tore a calf, followed by a disk in her back in May. That meant
she went to the IPC World Champs in France in August having done very little
training – and no long jump training at all – but came close to a PB in the
100m in a warm-up race in Germany, then jumped further in Lyon than she did
when winning in London! “So from now on, no more training!” she laughs.

“Before London, the physio’s
thought it was just a tight muscle, so kept rubbing it and making it worse. The
doctor was worried the muscle could rupture completely and end my career, but
luckily that didn’t happen. I took it easy in the semi-final to make the final
of the 100m, then gave it everything in the final and was fine for the first 60m.
After that it was just incredible pain. The next day was the long jump, but I told
myself I had trained for four years to be there, so I just had to put the pain
out of my mind and get on with what I came there for.”

At 28, Ilse is already
considered a veteran of international competition. Her first taste of
international competition came at the 2002 World Champs in France, where she
was the youngest member of the SA team at 16. “That was a real eye-opener for
me. Before the long jump, there was a Russian athlete with a red afro going a
bit crazy in the call room, teasing her hair in between hitting the wall and
screaming!” However, that didn’t put Ilse off and she brought home long jump gold
to go with a bronze in the 100m. “Your first
international gold medal is always special as you hear your national anthem,
but the Paralympic gold medals will always stand out.”

Ilse ran her first race in
primary school, aged eight, and promptly smashed the school record. However,
when she was 11, her tennis coach noticed that she was struggling to see the
ball, and then her teachers also noticed she couldn’t read the board any more,
so they urged her parents to have her eyes tested. She was diagnosed with a condition called Stargardt’s Disease, which affects the retina and
causes exceptionally blurry vision. “Between the ages of 11 and 13 my eyes deteriorated quite quickly,” says
Ilse. “I was told I will never go blind, but even up close things are blurred, so
I read with a magnifying glass, and I sit close to the TV. However, the most
annoying thing is that I can’t drive. I’m lucky to have people that drive me
around, including my incredibly supportive husband, Cassie, who works flexi
hours as a financial advisor.”

Born in Johannesburg, Ilse has
lived and trained in Stellenbosch since coming to study Sports Science in 2004,
which she followed with an Honours in Paediatric Exercise Science. She married
Cassie in 2010 and is currently training full-time plus doing volunteer work
with local children as a sports co-ordinator at a University of Stellenbosch
community project. She is part of the powerful Maties-Helderberg
club coached by Suzanne Ferreira that dominates SA Paralympic sports. “Our
Stellenbosch group is incredible. We enjoyed so much success in London, and in
Lyon only three out of SA’s 18 medals did not come from our club. It is also a
privilege to compete overseas with so many close friends.”

“I know quite a few people
with disabilities who were told by doctors they wouldn’t be able to compete or
participate, and many of them proved the doctors wrong. I believe that if you
have the passion for something, then it’s no-one’s place to stand in your way
because you’re disabled. If you have the self-belief that it is possible, go
for it – or else you’ll always wonder what if.”