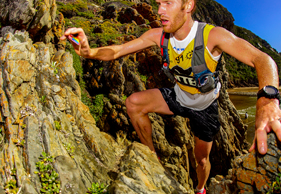 A
running battle of epic proportions played out on the famous Otter Hiking Trail as
arguably the strongest field of trail runners yet to square up on African soil
took on the marathon-length course. Amongst the men, World Champion Ricky
Lightfoot became the first international runner to claim victory here, dominating
from the start to clock 4:15:27 and shatter the 4:40:15 course record set by
Ryan Sandes. Second place went to 2012 Retto winner Ian Don Wauchope (4:24:33),
who used the penultimate climb to move from sixth to second place, while AJ
Calitz was third in 4:27:03.

In
the woman’s race, New Zealand’s Ruby Muir led from early on and finished in a
time of 4:55:34, while South African favourite Landie Greyling was never far
off the pace, but could not close down the break, finishing second in 4:58:57
and also breaking Jeannie Bomford’s previous record of 5:17:12. Nicolette
Griffioen was third in 5:24:57.

The
Otter Run, now in its fifth year, has established itself as the benchmark event
for marathon distance trail running in SA and is on the bucket list of most
South African endurance athletes, since the five-day hiking trail is off-limits
to trail runners for 363 days a year. With almost 3000m of vertical ascent and
the infamous Bloukrans River mouth crossing, the Grail of Trail is a
relentlessly technical race worthy of its reputation.