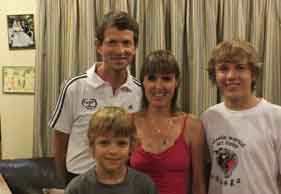 Nicole remembers the excitement of competing and the thrill of her first win, but her fondest memories of running come from the fun she had on international team trips to represent her country, alongside the top female athletic talent SA had in those years. She was part of four World Half Marathon Champs squads, represented SA in relays in Japan and Korea, and came very close to making it to the Olympics. Today all these ‘big names,’ such as Elana Meyer, Colleen De Reuck, Zola Pieterse, Gwen van Lingen, Alta Verster and Sonja Laxton live far apart, but they still try to keep in touch. “I especially remember one interesting trip to Guatemala in South America. There were some black runners with us and that was the first time some of these people saw a black person. They were totally fascinated.”

IN THE GENES
With a Springbok race walker for a father, Nicole was bound to find her way into sport, and in high school she realised she had running talent – and determination. This was proven when she fainted in her first cross-country race as a 13-year-old. “I ran so hard that I passed out, but I got up and finished.” In her first track season she competed in the 400m at the SA Junior Champs, and in matric she placed second in the SA Junior Champs 800m and third in the 1500m, and also second amongst the under-19s at the SA Cross Country Champs. “I was then offered a track scholarship to Nebraska in the USA. Unfortunately, I got injured and was homesick, so I came back at the end of ’85.”

The following year Nicole joined the police force. “That was the era when athletes such as Johan Fourie and Charmaine Gaile were part of the police force and their presence attracted thousands to stadiums.” That year she was not only awarded Springbok colours for cross-country, but also won the Bonnievale 10km series and got to compete in Ohio in the USA. “I won the event and that was probably the highlight of my career.” Then in 1989 she transferred to the army before marrying and moving to Natal, where she believes her road running career really took off as she regularly competed against Gwen van Lingen and Colleen De Reuck.

OLYMPIC DREAM
After getting divorced, moving back to Johannesburg and meeting her second husband, Chris, she took the step up to the marathon. “I run very much on my toes and the marathon is not really my distance, but my then manager Ray de Vries persuaded me.” In her first marathon, Nicole claimed the 1995 SA Marathon title in a time of 2:37, and then set her sights on the 1996 Olympics in Atlanta, but there lies her greatest disappointment. “The qualifying time was 2:37 and I ran a 2:36:29. Colleen and Elana got chosen for the team, but I was overlooked. That was a huge disappointment that my own country did not choose me.”

Later Nicole tried to qualify for the 2000 Olympics in Sydney. “I ran the London Marathon, but bailed. That put paid to my Olympic dream. From there I went back to the half marathon distance.” She was selected for the World Half Marathon Champs in Brussels, 2001, but after another disastrous run and suffering continuing injuries, she stopped competing at the age of 37.

Nicole still runs about 10km a day. “I can probably break 40 minutes for a 10km without too much effort, but I believe I have achieved my maximum and I have nothing more to prove. Now I use running as my Prozac, my time alone.” Her love of sport has transferred to her boys, Ayrton (16), a champion diver, and Greg (9), an excellent swimmer. Hubby Chris is no couch potato, either, and is currently training for the London Marathon. The family is all very adventurous, with the two boys keeping snakes and tarantulas in the house (both parents also did a venomous snake handling course), while Nicole and Chris are both licensed helicopter pilots.

Today Nicole feels that running today does not have the same depth it used to. “We have great athletes such as Rene Kalmer and Irvette van Zyl, but then there are very big gaps, and I think it has to do with lack of development. Many schools place too great emphasis on team sport. We need sport academies like in the rest of the world. Only when youngsters specialise from a young age will we produce Olympics winners.”