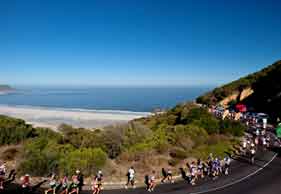 Christine Bernard: “I am running the Two Oceans Ultra for the first time. I’m wary about the weather, but looking forward to being part of the most beautiful race in the world. This is one I’m not doing for time, but rather to enjoy every moment of it!”

Camillah Adams: My goal is to complete it! The sole purpose I started running was to one day complete a Two Oceans Half Marathon. After my first 5km race in 2011, I became addicted to running. My dream is close to coming true come March!”

Graeme Saggers: “I’m doing the Ultra for the first time. Stressing like crazy, but very excited at the same time… I think about it every day, and every night at like 2am!”

Megs Hollis: “I am running the Two Oceans Half because I used to struggle to run 4km! Last year I started running 10km races and thoroughly enjoyed challenging myself – it is so motivating having something to train for, and a goal other than the number on a scale. It’s about perseverance and positivity! My hopes for race day are to cross the finish line with a huge smile and a decent time. I can’t wait to prove to myself that I can do it!”

Tamlyn Miller: “First time I am attempting the half marathon. My husband and I just want to finish the race in under three hours!”

Kim Boschoff: “Been running for the past year and I’ve never been more excited for a race! It’s going to be epic!”

Bongani Myaka: “First time ultra, training going well. I’m a bit scared, but I try to block those thoughts out my mind. I can’t wait!”

Aneekah Fataar: “After running 56km (and the plan is to finish the race under cut-off time), I expect to be sore… Very sore!”

Nyakwesi Keregero- Motsa: “I’m a Two Oceans Half Marathon first-timer. I’ve never been to Cape Town, so the only reason I’m doing this race this year is so I can experience the Cape Town Vibe.”

Rene Lourens: “Ultra first-timer! Have no idea what I’m letting myself in for!”

Henry Thank: “Oceans is something I’ve always wanted to do. I’m a bit wary if it rains, but I’m very much up for the challenge. I’m doing the half and looking forward to crossing the finish line injury-free!”

Roxanne Scholtz: “I started running seriously for the first time in January 2013 and I have been running consistently since. Ran my first 21km three weeks ago and finished my first marathon shortly after! What a feeling of absolute mixed emotions… I qualified for the Two Oceans Ultra and can’t wait to cross that finish line – I know I’m bigger than the challenge I’m facing and I’m determined to make it!”