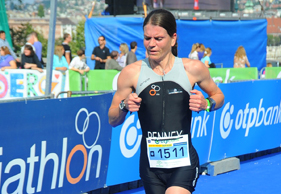 In 2010, my year started of with a bang, winning
the Friendly City Marathon in PE in January and putting in a good show at the
South African Triathlon Champs in Germiston. Then one evening, while out
running down Milner Street, Grahamastown, I stood on a stone, fell and suffered
a hairline fracture to my ankle. And this happened a week before the SA
Duathlon Champs. I was angry and devastated, and to make things worse, I got
retrenched from my job in between all the happenings!

So I was on crutches for six weeks, but I
remained positive throughout this very frustrating period. Then two weeks
before coming out of my cast, I heard that I had been selected to represent my
country at the World Triathlon Champs in Budapest, Hungary. The inevitable questions
followed… How would I raise R27,000 to enable me to travel, and would I be
able to get fit enough in time to compete? But I was determined, and when my hubby,
Steve and I discussed the situation, we agreed, “why not, if not!”

GIVING IT A GO

Fortunately, my injury healed nicely and I had
exactly eight weeks to get fit and raise R27 000. The first two weeks of rehab
were very intense and I had physio two hours each day. It was very painful, and
teaching myself to walk again and getting my muscle strength back required a
lot of courage and patience. My first swimming session started the day after I
came out of my cast, and Steve still took me to the pool on my crutches – I managed
to swim 750m, only being able to kick with one leg. My first few cycling sessions
were done on my indoor trainer until I was capable of using my legs on my TT
bike.

But still no running… I only started running
four weeks before leaving for Worlds! My first run was 1.6km, which took me
over 25 minutes to complete! I was basically teaching myself to run again after
12 weeks of no running, and I can say with pride that one week before leaving
for Worlds, I did a 4km time trial in 16:24. In between, I was still trying to
raise the funding I needed, by baking muffins, selling bacon and egg rolls, selling
raffle tickets, and organising a fun run. I also had more than 50 sponsors
donating towards my trip – the Grahamstown community really came together to
send their athlete overseas!

BACK UP TO SPEED

After eight weeks of blood sweat and tears, I
was able to compete, despite so many people telling me I would never make it. I
raced in the 30 to 34 age group, competing against 68 other entrants, and in both
the swim and the cycle I was heating up the pace. Then I hit the run, and
despite not being at my strongest, I still managed to overtake a few athletes.
By the time I finished, I was buggered, but ecstatic to find I had set a new PB
for the standard triathlon by over 13 minutes! Through the willpower of my mind
and the Grace of God, I learnt that all things are possible.