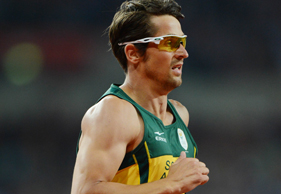 Traditionally, the title of ‘World’s Greatest Athlete’
was given to the man who won the Olympic decathlon event. After all, the
decathlon comprises ten events over two intense days of competition: 100m, long
jump, shot-put, high jump, 400m, 1 500m, 110m hurdles, discus, javelin and the
pole vault. The event works on a points system, instead of relying on podium
finishes, so while one athlete may be a fast sprinter, he still needs to score
well in the other disciplines in order to do well overall in the competition. “A
decathlete is like a handyman that has to know his way around everything,” says
Olympian and SA record holder Willem Coertzen. “It’s important to know the
basics instead of technical detail with specific training. Your fitness needs
to be tops and you have to be patient to find the balance.”

GIVING IT A GO

Willem says the first time he noticed decathlon was during
the 2004 Olympics in Athens, when he was studying his teaching Honours at the
University of Potchefstroom. “I thought I’d have a go and pitched up at an athletics
meet in Bloemfontein. I found that I took to it, so after my studies I moved on
to Europe for developed training and I found a coach in Greg Richards, who has
a decathlon background himself.” That saw Willem living in London for seven
years, although he says he struggled to adapt to a new culture and the busyness
of city life at first.

However, he was soon competing regularly for the Shaftesbury Barnet Harriers club, and in
2007 he won the South of England Decathlon Championship with a score of 7245 points. A
year later he returned to SA to grab his first national title, followed by a
silver medal at the African Championships in Addis Ababa, Ethiopia. “It was my
first major competition outside nationals and even though I had to deal with
the high altitude, I was happy,” he says. “Then I surprisingly won the bronze
in the pole vault – a day after my decathlon! I was just asked to fill in and
come in at any height, but then I got the medal!”

After the elation of those championships, Willem had
an operation on an injured groin muscle and was out of action for four months,
but the rehabilitation only made him stronger. A few months later, he set a new
national record of 7907 points with his third place finish in the Multistars
Decathlon meet in Italy. Then in 2009, he improved on that score with an
African record 8054 points at the Hypo-Meeting in Austria, despite only
finishing 11th, and that secured his selection for the World Champs
that same year. At the World Champs in Berlin, Willem finished 14th
with 8146 points, setting six new personal bests in the process!

In the lead-up to the 2012 Olympics, Willem once again
improved the SA record, scoring 8244 points at the SA Champs, and he was
selected for the London Games. “I made the decision a few years before that I
would be at London 2012, and the Games stand out because it was personal for me
– everything was 10 minutes away from where I stayed!” However, he was
disappointed to only place ninth after scoring 8173 points.

Willem moved back to Potchefstroom six months ago and continues
to focuse on his training, doing five to seven hours a day. Mondays and
Wednesdays are spent on weight training and throws, while Tuesdays and
Thursdays are focused on hurdles, running (400m, 1 500m and long runs) and
throws. He uses his weekends for long jump and high jump, and keeps his Fridays
for rest. “I’m on a break now before conditioning and training mid-November.
I’m aiming for a gold or silver at the Commonwealth Games next year, and I’ll
be looking at the next World Champs. There’s always Rio 2016, too!”

On top of his demanding training schedule, Willem still
finds time to be with his wife Odette and three-year-old daughter Wihane. “I’ve
learnt to cope with the routine. Sometimes I skip the track to run at home, and
after training it’s about keeping up with how active Wihane is!”