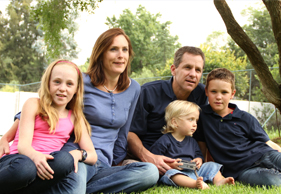 For a man with such a demanding job, Doug Jones has
quite the running CV: It includes five Comrades Marathons with a PB of 7:50, three
Old Mutual Two Oceans Ultras and a Puffer 80km run. He has also taken on four
94.7 Cycle Challenges, the Ironman 70.3 and the Midmar Mile – all while heading
up one of the country’s leading retail franchises. Doug has spent six years at
Massmart and has been Managing Director of Makro for the past year, and says he
continues to be inspired by the company. “I love the unique offering we give
people. It’s a small business but a big operation,” he explains. “We offer
across the board, to all ages, and we just have a lot of fun!”

Despite the long hours, on top of being a husband and
father to three young children, Doug still finds time to train and race,
although this year his running has been curtailed by a hip injury. “I normally wake
up at 5am and I’m excited to go out for a run. After that, I’m excited to get
to the office. Running is good for you in business – you remain positive and
enthusiastic,” says Doug. “Like life, like business, running tests your will to
follow-through on something. If you’re not fit, if you’re not committed, you’ll
bail.”

And so, in peak training, Doug runs time trials on
Tuesdays and Thursdays, with some track work for speed in the evenings, a
longer 20km on Wednesdays, and a tempo run on Friday mornings. His weekends are
reserved for long runs. “It’s great having a wife that is also active, that
runs with me and understands what running is all about,” says Doug. “She’s
allowed me to do what it takes to get to my goals.” And their kids, Kate (11),
Matthew (10) and Scott (2) also take part on weekend running getaways. “They’re
dragged to races, but I think when your children see you accomplishing your
goals, it can only be a positive influence. I work hard and succeed, and they
can do the same.”

Jo’burg born and bred, Doug was always active at
school, using running to get fit for cricket, rugby and squash. After studying
to become a chartered accountant, he moved to Canada, where he ran his first
marathon in Toronto in 2000, with his wife Robyn, but with kids on the way and
a move back to SA in 2003, Doug took a break from serious running for a few
years, until he joined the Bryanston Bombers training group. “This group of
guys had run Comrades and all these crazy races, and we became a close-knit
running family. They took me from jogger to runner, and that’s what makes
running so amazing – that nobody cares who you are or what your title is when
you have your running gear on! You just go out with your friends and it’s a
break-away from everything!”

Doug’s second shot at a marathon came in 2006 at the
Soweto Marathon, and eventually he moved onto Comrades in 2008, clinching a Bill
Rowan medal in 8:50. He went on to run five consecutive Comrades before missing
out this year with the hip injury, but says he will be back. “On my first go, I
remember crying when I crossed the finish, with my arm raised in the air.
Comrades is all about the journey and the build-up. The actual day? Well, it’s
a beast! But the hours on the road and meeting strangers is what makes it so
special!”

While being sidelined from running this whole year
after an op on his hip, Doug has been swimming and recently started running
again. He says he is determined to come back stronger than ever, and has a
bucket-list of running goals he’d still like to tick off. “I want a silver and my
Green Number at Comrades, and I want to run a sub-3:00 marathon. In the next
few years, I’d like to do Ironman, a 100-miler, maybe Washie, maybe the Skyrun,
and swim and mountain bike more.” And while it might seem a stretch for a busy
businessman, he explains that it’s all about compromise. “I don’t judge people
who say they don’t have time, because I also work hard and I stress, but one
needs to compromise. You need to get that balance right!”