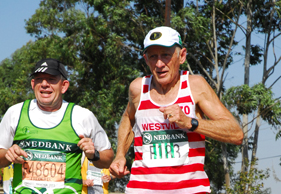 Anybody looking for advice
on how to tackle the Comrades Marathon would do well to ask Dave Rogers for a
few tips. After all, the sprightly 70-year-old from Hillcrest is the leading
all-time finisher of the race with 45 medals to his name, including three gold
medals, a third-place finish and a best time of 5:52:00. However, his wisdom is
built on more than just mileage: “The most important factor in Comrades success
is that you must enjoy running. There’s no point in doing a sport if you don’t
enjoy it, especially running, or you’re not going to last long,” says Dave. “If
I don’t have my daily run, I get grumpy!”

Now Comrades runners with
40 or more finishes wear a distinctive race number with four vertical green
stripes, and Dave says this means he gets a lot of attention from fellow
runners. “Many runners wish me well – that’s the fantastic camaraderie of
Comrades – but the funniest was a couple of years back when I had a few
Japanese runners near me. One asked me how many I had run, and then they asked
me to stop so they could each take their picture with me, one by one!”

Dave ran his first Comrades
in 1961, aged 18, running with his older brother Ken – or Tank, as he is widely
known thanks to his robust style of playing soccer in his younger days – and
they finished together in 10:13:35. “It all started when Tank came home from
work one day and said he had met one of the founders of Comrades, who had been telling
him about the camaraderie of the race, so he said he wanted to run it, and asked
will I run with him? I asked how far it is, and when he told me… well, my
answer is unprintable! But we submitted our entries.”

Tank went on to complete
the race 18 times, while younger brother George earned 15 medals, but “I’m the
only silly bugger still running out of the brothers,” jokes Dave. In the 53
years since his first Comrades, he has only missed five races, and of the three
years he failed to finish, two were exceptionally close shaves. “One year I
missed the final cut-off by 14 seconds, while another year I missed by two
minutes. But thank goodness the race has actually become easier over the years.
The topography of the roads has changed a lot since the 70s, especially the
lower section as you get towards Durban. The old roads were a hell of a lot
hillier, even though the distance was roughly the same. In the 70s and 80s they
were saying the race had become easier than the 30s and 40s, and now the same can
be said of the present versus the 70s!”

Dave has lived in Durban
since his parents were transferred there when he was 12, and he worked in
engineering and labour relations before ending up as the CEO of a medical aid fund.
He married Wendy 45 years ago and they have four children and six grandkids.
“Wendy has been an absolute star for me all these years, assisting with all my
races. At Comrades, she seconded me from 1966 right through to the late 70s,
when motorbikes replaced seconding cars, and nowadays she strolls half a kay
down to the route near our home in Hillcrest, with the grandkids, to wait for
me to pass. My sons Sean, Kevin and Michael have all run the Comrades and
sometimes ran with me, and my daughter Tracey was keen to run it two years ago,
but then fell pregnant. I reckon she will be back in a few years.”

Unsurprisingly, the most
common question this veteran of the Comrades hears these days is how many more
medals he thinks he can earn. “When will I have run enough? The day I stop
breathing,” he laughs. “I have picked up a few injuries in recent years, but if
my luck holds and the body allows, I can keep going.

It would be an absolute
dream to reach 50, which means at least another five years, but if I don’t,
then no problem, because I have thoroughly enjoyed my running and made lifelong
friends along the way. For me it has always been that I enjoy running, so I
will keep going until I can’t run any more.”