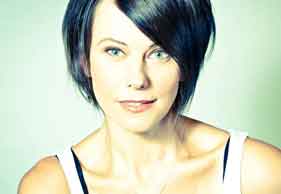 In October 2011, Milan celebrated her 37th birthday and decided she needed a new challenge. “A big one,” she emphasises. So she decided to enter the gruelling OTTER African Trail Run marathon, the so-called ‘Grail of Trail Running.’ For someone who had never run a kilometre in her life, this was quite some goal! “I remember how proud I was to finish my first 5km fun run. My first 10km was a month later in Paarl, and then I took on my first 21km in Wellington, in May that year. I then tackled the mountains!”

In October 2012, Milan finished the Otter in 10:02 and describes it as the best 10 hours of her life. “I’m a working mom with two kids, an ordinary woman. I felt extraordinary that day. I was a gymnast at school, I never did track or any team sport. I think it’s because I’ve always been a bit of a loner, and I like to do my own thing. I like silence. Those 10 hours, by myself, was the best time I’ve ever had!” She will be taking on the Otter again this year, as well as many other trail runs.

CALL OF THE STAGE
Milan studied drama in Pretoria before landing her first job on Isidingo. “I doubted my potential as an actress while at school. It wasn’t an obvious choice. I’m not loud. I’m not an extrovert. I thought those were essential qualities if you consider a life on stage, but when it came down to choosing, there was nothing else I wanted to be,” says Milan. After Isidingo, she went to New York to further her studies at the Creative Acting Company, then returned to South Africa and landed the part of Sage in the film Murmer, which she considers her favourite role thus far, and more recently she has been seen in The Wild.

Having gotten married to Schalk van der Merwe and had two kids, Steph and Lua, Milan also published a book called Koemelaat, a humorous take on motherhood. “I kept a journal about my first three years of motherhood. This is where ‘I call a spade a spade.’ I tell readers about my struggles and frustrations. It’s a funny book, because I say what a lot of women feel. It’s ‘Sam Cowen’, but for an Afrikaans audience.”

FIT AND FOCUSED
Milan says she and Schalk enjoy a fit and healthy lifestyle, although he is more of a triathlete (he’s busy training for the Ironman in April), and they do careful planning as to when training and family time takes place. Their kids enjoy cheering their parents on. “Some afternoons when we run in town, the kids will play at a park with the nanny and we will run a circular route so they can ‘high five’ us with each lap. I love what our training discipline teaches them. Every time my husband finishes a race my son will ask, ‘Daddy did you win?’ And my husband answers: ‘No love, Daddy finished.’ I get tears in my eyes just thinking about the beautiful life lessons we learn from sport,” says Milan.

She says her biggest motivation to keep fit is a healthy mind. “Ever since I read Julia Cameron’s book, Walking in this world, I’ve used walking as meditation and for brainstorming new ideas. Walking naturally became running.” As an actress, Milan says she has to look her best, but running gives her more than just looks. “I’m nearing 40, I care more about what I feel like, and less about what I look like. Being fit makes me more beautiful than any plastic surgery ever could.”

Follow Milan’s blog, Pssst, which focuses on motherhood, social issues as well as her progress in training for the Otter Trailwww.pssst.co.za