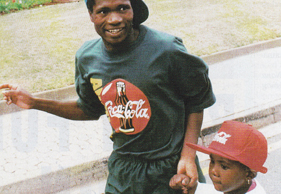 Few South Africans who
watched will ever forget the 1996 men’s Olympic Marathon in Atlanta, when the
South African trio of Lawrence Peu, Gert Thys and Josiah Thugwane moved to the
front at 24km and surged to break up the lead group of 60 runners. By 35km, it
was down to a three-way fight between Josiah, South Korea’s Lee Bong-Ju and
Eric Wainaina of Kenya. Then with two kays to go, Josiah made his move. As the
other two looked sideways for their last water bottles, the South African
opened a small gap, which was just enough to take the win by three seconds in
2:12:36. It was the closest finish in Olympic marathon history.

It was also the first Olympic
gold medal won by a black South African, and Josiah found himself the toast of the nation, but he readily admits that
national pride was not his main motivation. “I was earning R480 a month on the
mines and my family was staying in a shack. The South African government had
offered a R150,000 incentive for a gold, so I put everything into my training
to get that money for my family. As I entered the stadium, I knew I had won it. R150,000 was so much
money for running a 2:12!”

Ironically,
Josiah was almost left out of the 1996 Olympic team, having already narrowly
missed out on selection for the 1992 Barcelona Olympic Marathon. “I was fourth
on the list in 1992 and only the first three went. Then in 1995, I won the
Honoloulu Marathon, but it was hot, hot, hot… I ran 2:15 and missed the 2:14
qualifying standard. Then at SA Champs I ran 2:12, but that was still not fast
enough, because Lawrence Peu, Xolile Yawa, Gert Thys and Willie Mtolo had all
run 2:10 or faster.”

Fortunately
for Josiah, as SA Champ he was still selected for the Atlanta team… and the
rest is history. His win in Atlanta catapulted him to super-stardom and with
the help of his mentor and coach Jacques Malan, he learnt to speak English so
that he could communicate with the media and with race organisers around the
world. “The Japanese invited me to run the Fukuoka Marathon in December 1996,
but there was too much snow – I was still freezing at 16km and decided to stop.
I told them to invite me back, to try again, and they said OK.” And so in 1997,
after finishing third in the London Marathon in 2:08:06, Josiah returned to
Japan and won in 2:07:28, shattering Zithulele Sinque’s 1986 SA Record of 2:08:04.
Only three other South Africans have gone faster than Josiah since then.

Unfortunately, his sudden
increase in fame also led to people hounding him for money. The unwanted
attention also brought back unpleasant memories of being car-jacked and shot just
five months before the Atlanta Games, with the bullet grazing his chin as he
leapt from the moving vehicle. “People were always asking about money! I had
bought a house in Mpumalanga, but didn’t feel my family was safe there, so we
moved to Joburg.” Today, Josiah and his wife Zodwa live on a farm near
Bronkhorstspruit, with their children Zandile (19), Thandi (16) and Lucky
(12).

In 2000 Josiah finished
seventh in the London Marathon, followed by sixth in New York, but he had to be
content with 20th in the Sydney Olympic Marathon. He failed to
finish the 2001 World Champs Marathon in Edmonton, Canada, but in 2002 once
again tasted success in Japan, winning the Nagano Marathon in 2:13:23. Another
DNF at the 2003 World Champs in Paris followed, and by then Josiah’s top flight
running career seemed to be coming to a close… until he (briefly) reinvented
himself as an ultra-marathoner.

In 2005, Josiah won the 50km
Loskop Marathon, clocking a course record 2:44:03, and the second-fastest time
ever by a South African. He then finished second in the 2006 Old Mutual Two
Oceans Marathon, but retired just a year later. “I got the flu just before the
2007 Two Oceans, and because I had not really enjoyed the ultras, I decided my
racing days were over. My body is not really built for running ultras, although
I still want to run Comrades one day, just to enjoy it,” says the 42-year-old. Today
he is focused on developing young SA athletes, working with Elana Meyer’s
Endurocad initiative to identify and train future Olympic marathoners. “My big
problem now is that I stopped training, because I want to run with my athletes
so I can keep a proper eye on them. That’s why I am training again for a fast
10km!”