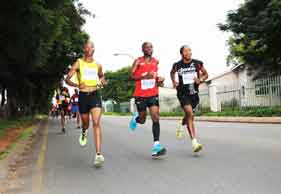 The 30th edition of the event, hosted by the Jeppe Quondam Athletics section, was once again a great family day out, attracting a field of 5 231 athletes across the 42km and 21km events, with a further 1 750 taking part in the 4km and 8km funs runs. That’s quite some growth in the fun runs, considering that there were only 250 entries in the funs runs just five years ago! And the cool, overcast weather on the day also helped all the athletes cope with the mixed bag of uphills and downhills on the various routes.

FROM THE FINISHLINE
Here’s what some of the Pick n Pay finishers had to say just after crossing the line.

Susan Mzinyathi: It’s my first Pick n Pay this year. It’s a mixed route with lots of hills to deal with, but I enjoyed it very much.”

Neil Coville: “It was a hard run today – it always is! – and it got very humid as the morning went on. I got through it, though, and I am very happy with my time, and I’ll always come back.”

Thobile Nkosi: “It’s very mixed. If it was too flat, it would be boring. It is a tough route, but a great day out for the family and for friends.”

Argentina Senda: “The cool weather helped me out. Pick n Pay is usually a training run before Two Oceans and a small step towards Comrades for me.”

Maxwell Godwana: “This is my first 21km. The route had lots of steep hills, but it is worth running again, that’s for sure! Next year, I’ll be doing the 42km race!”

After the race, many athletes went online or grabbed their phones to have their say on Facebook and Twitter about the event.

Charl Henry Whitaker: Was a TOUGH day on the road, but survived with another 42.2km in the bag! Sometimes we need to hit the wall to experience the hardness of a race, so we can train harder and work smarter on the next race day!

@Shifty617: Awesome day out, huge field so the start was super slow.

Janet Brandon: Traffic was a disaster, and finding parking a nightmare. So much so that when I arrived to register for the fun run, with only five minutes to spare, they had run out of numbers. This meant that at the finish line my son (6) and his friend were refused medals. However, the day was saved by fantastic marshals, water points, excellent venue, and most especially two kind-hearted ladies who generously gave their fun run medals to the two kids. Thank you to those ladies, whoever you are!

@Nutreats: despite the 10min late start and incorrect km markers (750m over for most of the 21 course, 400 at the end), #pnpmarathon was great.

Bokang-kabelo Tsotetsi: I ran the Marathon and did great – felt like doing 10 more kays.

@enjabz: did the half, besides initially struggling with finding parking, the race itself was nice. I really enjoyed it!

Warren Graham: Congratulations to all the athletes competing in the 2013 PnP marathon! Thank you, Pick n Pay, for allowing me to inspire these remarkable athletes with songs at your 17/38km waterpoint.

Faan Van Der Westhuizen: It was tough man, but I qualified and that’s all that matters!