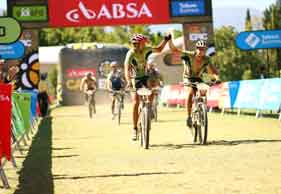 The gruelling 698km route with 15 650m of climbing from Citrusdal to Lourensford Wine Estate might seem a daunting task to many an athlete, but for seasoned rider John Gale, a chartered accountant from Cape Town, the ABSA Cape Epic is an annual must. “The race is a staggering one. My first run blew me away and it’s a mammoth undertaking for anybody,” says John. “You also have an opportunity to participate with the best in the world – you’re actually surrounded by world champs!”

John’s first Epic entry came by chance and was a last-minute decision. He had done just 60km of training and admits that he totally unprepared for the distance. “I guess I didn’t read the fine print and I had no idea what I was letting myself in for,” he explains. “It was the hardest ride I had ever done, and we had to make do and learn along the route.”

THE ANNUAL CHALLENGE
Always an active person, John took up mountain biking and running after varsity and plotted several goals each year, taking part in four Old Mutual Two Oceans Marathons, finishing numerous mountain bike races such as To Hell and Back, Sani2C, Wines2Whales, the Rhodes Mountain Bike Marathon as well as the Knysna Mountain Bike Race. “My running has definitely helped my cycling over the years,” he says, “and going out for a run is the most effective thing you can do in terms of fitness. You can go for a 10km cycle and it’s an easy ride, while a 10km run tests you a bit more.” With a special focus on the Epic each year, John has cut down his running due to a niggling calf injury, but is still hoping to run his fifth Two Oceans one day.

So why does John keep coming back to the Epic? “The first time was by chance. My second time I was offered an entry before I started training properly and my third time just came along,” he explains. “I’ve been very lucky to stay fit enough each year so I can participate – it’s an administrative wonder when you see thousands moving together with ready available resources at every turn!”

SIDELINE SUPPORT
Living in Cape Town, John says the Epic has always been a ‘convenient’ event for his family, and he has been lucky over the years to have no work issues get in the way of his participation, while he wakes early each morning to fit in training rides. “For one to survive the Epic, you need to get more than 11 hours of training in a week and long rides on weekends. I have lots of support from my wife Beth and my two kids, and we often find races close to us that the whole family can take part in.” Beth also makes sure the family eats right, which goes a long way to helping John’s training and active lifestyle. “In this type of event, it’s not possible without the support of your partner,” says John, “especially on those eight days of riding. Beth knows that it is something I want to pursue.”

Over the years, John has ridden the Epic with various partners, Riaan Meintjies, Jakes Jacobsen and George Evans, and reveals that he has learnt a lot compared to his first two attempts at the event. “In any team event, as opposed to a solo run, you are dependent on the people around you – especially with this massive distance to overcome. You can’t fight with your partners; at the end of the day it’s about having fun.” This year, he says he and riding partner George are fit and ready to race, despite the mystery that surrounds the route. “You never really know what you’re going to experience or how your ride is going to go,” says John, “it’s just a tremendous race through the most stunning parts of SA.”

He also feels that Epic first-timers don’t need his advice. “The amount of info out there compared to years gone by is unbelievable. In my first year there was a contingent of international riders who had done the Trans Alps and Rockies, but the rest were Dusi and Comrades goers who had little knowledge of the race. Nowadays, no one pitches up unprepared.”

SPECIAL TIMES
For John, the 10th anniversary will be a special one, but he says it will not be his last Epic. In fact, he reckons he will most likely be back year after year. “It would be difficult to ever let go of the Epic – I have this compelling desire to do all of them!”

For more info on the ABSA Cape Epic, visit www.cape-epic.com, and follow the event on Twitter: @AbsaCapeEpic.