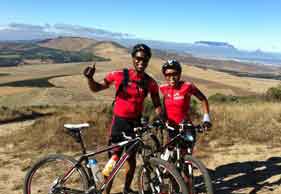 Gugu Zulu always wanted to drive: “When I was still very young, I remember my mom asked me what I want to be one day and I said I want to be a driver. She asked me what kind of driver I’d be and I always replied with the same thing: I’ll just be a driver.” His dream came true in 1997 when he saw an advert in The Sowetan calling for more black people in motorsport, and he grabbed the opportunity to participate in a development programme with the Isondo Racing Academy.

The Saturday development schools at Kyalami started off in go-karts to introduce youngsters to the sport and Gugu flourished behind the wheel. Two years later, he was one of 17 drivers to be chosen in trials and in 2000 Gugu won the Vodacom Isondo Sports national championship, winning 13 out of 16 races and with two second places. His 11-year career now boasts many podium finishes under his longstanding mentor Sarel Van Der Merwe and racing for Volkswagen SA. “It’s been great to be involved in what I love doing,” says Gugu. “I even got the opportunity to race against F1 driver Sergio P?rez and IndyCar driver Marco Andretti in the USA – on occasions the timesheets show that I was quickest!”

Now, the racing world’s ‘fastest brother in Africa’ will be trading in an engine and steering wheel for pedals and handlebars as he takes on the gruelling ABSA Cape Epic off-road race. “I want to honour the ride in the 10th anniversary of the event,” says Gugu. “It will be a huge tick off my bucket list and I have so much respect for the event – you get average guys racing with the best in the world!”

THE CYCLING BUG BITES
Gugu’s love for motorsport and cycling both began at a young age when he owned his first BMX and collected various car magazines. He would often cycle from Soweto to Randburg and back with friends, taking photographs of cars he admired along the way. “I controlled my own fitness back in high school by riding to Parktown Boys High every day, and after my dad took me to varsity in Midrand a few times, he told me to find my own way to get to classes.” After discovering a hole in the middle of his taxi and landing up in Alexandra on an obscure route, Gugu knew that he needed a bike. “I remember my dad and I going to Makro where I got a mountain bike. I then rode 17km to varsity every day, besides some of the rainy days.”

Gugu soon got involved in mountain biking, and has also completed nine Momentum 94.7 Cycle races and three Cape Argus Pick n Pay Cycle Tours. He feels that training for the Cape Epic fits in well with his rally career: “In both cases, you go over rivers and bumps, and cycling has definitely sharpened my concentration in the car!” Another bonus is that Gugu and long-time girlfriend Letshego Moshoeu will be racing the Epic together, and he says he is grateful for an active, adventurous partner.

SHARING THE GOAL
“Letshego was the runner and introduced me to running,” says Gugu, “while I introduced her to cycling. The last three years, we’ve run the Two Oceans Marathon together – she does the ultra while I do the half, and this year the Two Oceans half will be my recovery run after the Epic. Gugu adds that the Epic is but a stepping stone – next they’re planning to work on their swimming to train for Ironman. “Some riders have partners who don’t understand why they compete and train – luckily I don’t have that problem. Riding with Letshego is amazing. We support each other, we have common goals, and we share a healthy lifestyle.”

Gugu admits that the Epic will be a big test for him, but most importantly he’s ready to have fun. “I have a very competitive nature, but I just want to cross the finish and enjoy this amazing experience.” Giving back is also important to Gugu, so he will be riding the Epic on behalf of the JAG Foundation and JAG Riders Programme, which focuses on cycling as a means to empower the youth of disadvantaged communities in the Western Cape. “Sport can make the difference – it affects the way you approach life, they way you strategise, discipline yourself and work with people.”