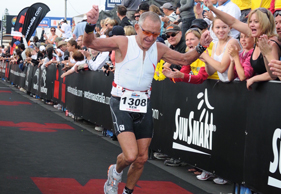 Having focused on the full Ironman distance in recent
years, training for the considerably shorter Olympic distance of 1.5km swim,
40km bike and 10km run meant that Ken and Rob had to alter their usual training
programme. After all, the last time Ken actually raced such a short triathlon
was in 2004 in Cancun, Mexico, where he placed fourth in his age group. “For
shorter triathlons, you have to readjust from start to finish – and go out
strong from start to finish,” says Ken. “Our swim sprints therefore went down
to 50m, 100m, 200m, while our rides went down to short 10km, 20km and 30km time
trials. Our running was reduced to quick track sessions.”

That change in focus did the trick for the veteran
pair from Johannesburg, because Ken and Rob went into the recent ITU World
Triathlon Grand Finale in London with much improved speed, and it showed in Ken’s
first place in the 70-74 age category in 2:24:12 as well as Rob’s seventh place
in the 60-64 category in 2:12:18. “I remember having a good swim and ride at
the tri, but got lost in transition after the bike leg. Eventually I tracked
back and had a good run,” says Ken, who then, at the last minute, also entered
the pair in the London Aquathlon World Champs, where Ken claimed another gold
medal in his age group in 41:52 and Rob took fifth in his age group in 39:24!

These incredible performances are just the latest in a
long list of achievements by Ken and Rob thanks to their highly successful
friendship and training partnership. “I would never have got the results
without Rob by my side through training every day,” says Ken. “Rob and I train
wisely and consistently, and I think that comes with experience. Through the
years that we’ve been training together, we’ve found a programme that’s suited
us. It’s always great to have someone around you motivating you to push on and
work harder.”

Ken also feels that he needs to up his game because
he’s a decade older than Rob, and that has pushed him on to greater
achievements. “We did the Comrades, Ironman, Duzi and Midmar Mile together, and
we climbed Kilimanjaro, and it’s great to share those experiences,” says Ken.
“I remember going to Kona in 2001 by myself and it’s not the same – you need
someone to share your sport with.” The pair met at Jeppe Quandom Athletics Club
in late 1997 when Rob started training for his first Comrades Marathon. “Rob took
a drunken bet with a friend that he could do Comrades and so joined the club. That’s
when we started training together, and with Rob’s background in playing and
coaching pro baseball, I knew that he had a coach’s mentality and structure.”

After that first event training together, they have
been inseparable, with Rob responsible for fine-tuning their training schedule,
normally working back from the race date of Ironman to determine when to do
their long swims, runs and rides. These days the duo normally fit in an
impressive two training sessions a day, and 13 sessions a week, with four days
a week set for running. They also do a cycle-to-run session once or twice a
week, focusing on speed, while adding two days a week for strength work
sessions in the gym. Next year, they’ll once again be running Comrades together,
as Rob was there for Ken’s 20th run, and in 2014 Rob will run his 10th.
“We’re in the same boat, Rob and I. We’re both around that age, are divorced,
our children are older, and we are in a time of our lives where we can afford
to focus on our training.”

Ken only took up running at age 32, joining Jeppe and working
up to his first Comrades at 39, but he has gone on to earn nine silver medals
in his 21 Comrades, with a PB of 7:05, and has also run 13 Old Mutual Two
Oceans ultras, with six silver medals to his name and a fastest finish of 3:54.
His name is plastered all over the Jeppe Honours Boards, thanks to his
impressive times across all distances. Furthermore, in 14 Ironman events, Ken has
finished on the podium in his age category 12 times! “I did the Comrades to
Comrades for years and needed a change and new goals, so then it was my start
at Ironman in 2000,” he says, “and now that I’m experienced and getting older
and doing Ironman year in and year out, I still don’t feel the need to stop. I
want to do as much as I can.”

Back in 2011, Ken also won his then 65-69 age group at
the SunSmart Ironman Western Australia in a magnificent time of 11:42, smashing
the previous course record (12:06) by almost 30 minutes – with Rob placing third
in the 55-59 category. Ken has also held several national and Gauteng triathlon
champs titles in his age group and posted several wins at Ironman South Africa
70.3. Last year, on his third trip to the Ironman World Champs in Kona, he finished
fifth in 14:40:49 – and this after breaking his collarbone several weeks earlier
and swimming with one arm for a while. Next year, Ken and Rob are looking to
once again do both the half Ironman and Ironman South Africa events, as well as
Comrades. “We’re also hoping to do the Ironman in Cairns, Australia in 2015,
but there are obviously huge expenses in the sport,” says Ken. “Still, we’ve
been all over! Cancun, Ohio, Sweden, Kona and Nice. It’s been such a splendid
experience.”

When asked how he stays so sprightly at his age, he
says he doesn’t know the answer. “Some guys tell me they wish they could
perform like me when they’re my age. I guess I’ve just had sport all around me
and that’s the secret,” he explains. “My running has always been consistent,
even though there’s a bit of a slack off after an event, but it’s not long
before Rob and I are at it and focused all over again. I’ve been fortunate and
I’ll do it until I can’t anymore.”