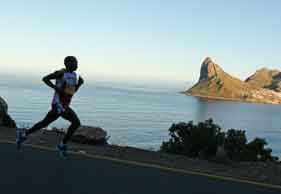 In 2004, the year that Chapman’s Peak Drive was reopened and the Old Mutual Two Oceans Marathon returned to its traditional route, the field in the 56km ultra-marathon climbed to an all-time high of 9 769 entries. That beat the previous record of 9 227, set in 1991 but now, in 2013, we have a new record, as the entries counter was standing on 9 847 at the time of going to print, near the end of February, with two weeks still to go before entries closed on 5 March!

When you add the maximum sold-out 16 000 entries in the half marathon, the maximum sold-out 800 in the trail runs, and the 900-plus entries already received for the International Friendship Run, plus entries already received for the various fun runs the total number of athletes who will be in action over the Easter Weekend already stands at over 29 000. In 2012, the total number across all events reached 28 794, and at least another 1 000 entries are still expected to come in for the Good Friday Fun Runs, so the total figure for 2013 could go past 30 000 – but even if no more entries came in (which we all know is not going to happen), the 2013 Two Oceans is already the biggest of all time, and further cements the event’s status as South Africa’s largest running event.

Looking at the statistics of the ultra, it is interesting to note that 39% will be doing the race for the first time, undertaking their first Two Oceans ‘Voyage,’ which is testament to fact that earning a finisher’s medal at the ‘World’s most Beautiful Marathon’ remains a highly sought after achievement. In fact, there are already 1 300 more novices in the ultra than last year’s race, which had a 27% novice entry stat! Another very pleasing figure – if you will excuse the pun – is the number of women running the ultra this year. Last year 26% of the field were female, while this year the stat has climbed to 30%. Comparing numbers, by the end of February there were already nearly 1 000 more women in the field than 2012.

But wait, there’s more… as they say in the TV infomercials. International entries in the ultra (from countries outside of Africa) have risen this year to all time high of over 700. Last year there were 567, which was already a big jump over the 2011 record of 494 – so the international marketing efforts of the Two Oceans Marathon Organisation are clearly paying off! Also, the record for African entries (from countries outside of South Africa) has been broken: It was 176 entries in 2011, while this year entries have already climbed past 180. (Oh yes, the entries for the International Friendship Run on Good Friday have also climbed over 900, well past the 2012 record of 768.)

Bringing things all the way home, the split between Western Cape entries and those from other provinces stands at 25% to 75%, which is very similar to the 26-74% split of 2012, but note that the total number of entries in both categories are significantly higher this year, which once again shows that the Two Oceans ultra is not only one of the country’s most popular events, but is growing in popularity!

Ultra entries close on 5 March, as do all substitutions, upgrades and changes of seeding, and absolutely no changes whatsoever will be permitted after that date. Runners should also take note that it is against the race rules to give a number away to another runner if you can no longer run, and this will lead to disqualification for both runners and a ban from the event for a year

So, now it is full speed ahead as we move towards the Easter long weekend and the annual voyage around the Peninsula. The 2013 Two Oceans promises to be the biggest and best of all time… and perhaps we may also see some new course records set to go with all the record entries!

The programme for the annual Two Oceans Easter Weekend is jam-packed with highlight events, so check out the list below and start planning your long weekend.

THE EXPO THAT HAS IT ALL

The Old Mutual Two Oceans Marathon Exhibition runs from 27 to 29 March at the Cape Town International Convention Centre. Traditionally, the exhibition was a pick-up point for race numbers, but it has grown into a far more inclusive sports event.

Open to the public and free of charge, the Old Mutual Two Oceans Marathon Exhibition is the perfect opportunity for running and fitness enthusiasts to see the latest gear from top sports brands, notably adidas, the new technical sponsor of the event, which will be showcasing their range of BOOST running shoes amongst other running apparel innovation. And there will be new products to test from the likes of Gu at their Energy Lab, as well as innovative new technology from many other industry leaders on display.

These three days of pre-race build up provide the perfect opportunity for runners to get into race mode. Old Mutual will be inviting visitors to meet the Virtual Coach or check cholesterol and general health with trained professionals. They will also be offering foot massages and will be handing out personalised supporter posters too.

With over 100 exhibitors to see and buy from, race runners are also able to pick up any last minute gear that they may have forgotten en route to the world’s most beautiful marathon. With all of these services and exhibitors under one roof, the pre-race routine just got that much easier. The only thing left to do is run.

The Old Mutual Two Oceans Marathon doesn’t just provide a great day out for runners, the event is also a fantastic way to give something back to the community. For that reason, the Two Oceans Marathon Initiative (TOMI) was launched for the 2012 event and replaced all previous race charities. TOMI is a fundraising initiative that provides much-needed funding for select groups of charities, with the emphasis placed on ensuring that the education and sporting needs of children are met, education facilities are provided and upgraded, and environmental issues involving our parks, flora and fauna, as well as animals both on land and in the water, are included.

If you would like to do a direct deposit, our banking details are:

Runners and walkers of all ages are invited to take part in the Old Mutual Two Oceans Fun Runs, taking place at the University of Cape Town (UCT) rugby fields on Good Friday, 29 March. There will be loads of fun for the whole family:

15:00  8km fun run/walk – the perfect loosener for those running the half or the ultra marathon.

The entry fee for all the events in the fun run programme will be R25. Late entries will be taken on the day in the registration tent at UCT from 9am onwards, but to avoid the queues, enter online at www.twooceansmarathon.org.za. You can also pre-enter manually at the Western Province Athletics office at Vygieskraal Stadium, Johnstone Road, Athlone, weekdays 09h30-15h00, or at the Two Oceans Expo on the Wednesday and Thursday. More info at Tel 021 699 0615 or funrun@twooceansmarathon.org.za

FUN RUNS FOR THE COMMUNITIES

The distance of 5.6km was chosen to align these fun runs with the 56km Old Mutual Two Oceans Ultra. The series provides an opportunity to identify running talent and creates a platform for development of future top runners, as some participants will be invited to take part in the Old Mutual Two Oceans Marathon Fun Runs on Good Friday.

When you run your tenth Old Mutual Two Oceans Marathon, you are awarded your permanent Blue Number, and similarly, when you complete your tenth Two Oceans Half, you receive your Light Blue Number. The Blue Number Club (BNC) was founded to celebrate this achievement, and a special BNC area is reserved for BNC members at Registration as well as on the finish line on race day.

Furthermore, each year the Blue number Club Dinner takes place two days before the race, to give all the Blue Number holders a special opportunity to meet up. This year it will be held on Thursday 28 March at the Old Mutual Business School in Pinelands. For more info, contact Tel: 021 657 5140 or e-mail: info@twooceansmarathon.org.za.

One of the most notable charitable initiatives of the Two Oceans event is the Runners’ Village, which provides accommodation and meals to athletes from disadvantage communities who do not have the financial means to participate in the Old Mutual Two Oceans Marathon, but do have the desire to be part of the ‘world’s most beautiful marathon.’ Runners must be a club member and must earn no more than R3000 a month in order to qualify for the Village, and once in, they are always looked after very well by the dedicated team of volunteers. Who knows, perhaps we may see a gold medallist amongst the Runners’ Village runners this year.

With the increase in entries at this year’s Two Oceans, it is more important than ever for runners to ake note of the parking arrangements that the organisers have laid on. The UCT campus rapidly fills up on race day and cannot accommodate all the tens of thousands of cars that will head towards the start and finish of this great event, so rather use one of the extra parking facilities at four schools within a 1km radius of the start, at Westerford High School, SACS High & Junior Schools, and Groote Schuur High School. A shuttle service will run at regular intervals from the finish to all the schools so that runners can get back to the ir cars after completing their event. There will be a stand at the Expo with large maps and marshals to explain the various options to you. And remember the best way to avoid stress on race day is to arrive early!

The following spots have been identified as spectator ‘hot spots’ and are great for watching the race and taking in the breathtaking views that Cape Town has to offer:

Just take note that several roads will be closed on race day to ensure the free flow and safety of the runners. To see a full list of road closures, go to www.twooceansmarathon.org.za/support/road-closure

CATCH IT LIVE ON SABC 2

The world’s most beautiful marathon will be broadcast live on SABC 2 on race day, so if you’re not running and can’t be on the course to support the runners come Easter weekend, make sure you have the alarm clock set, the coffee and rusks ready and couch booked from 6:25am! The broadcast will start with the start of the ultra, and coverage will continue until 10:30