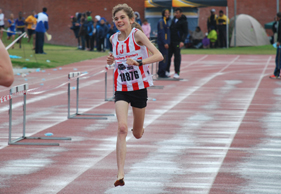 It’s been a breakthrough year for Annie Bothma. The
17-year-old from Stellenbosch has run the fastest times in 2013 by a junior for
10km (36:47) and 15km (56:41), and she was selected by Western Province to run
at the SA Cross Country Champs in February, where she finished third, despite a
twisted ankle, and was selected to go to Poland for the World Champs in March.
Then in April she claimed the SA Junior 5000m title on the track, despite
running barefoot and severely burning her feet, and in May she added the junior
title at the SA 10km Champs. At the time of writing, she was also on course to
retain her junior title in the Spar Women’s Series Grand Prix.

And all this despite suffering from debilitating bouts
of illness. “It all started when I almost died of scarlet fever when I was six.
Since then I have struggled with my health, especially since grade five, losing
a lot of weight and spending more than a year in hospital if you put it
together. I started running in grade seven to escape the problems, and the more
I ran, the more I wanted to run – and then I started to become good at it. I fell
ill again at the World Champs and didn’t do that well, but I believe that made
me mentally stronger, which allowed me to come back and win the two SA titles.”

Annie lives with her parents and two brothers and is
currently in grade 11 at Bloemhof High School. Her other passion is art, and
she runs her own small business selling textiles and craft products to local
businesses. She hasn’t decided yet what she wants to do after school, but says,
“If I could, I would just run. I’m planning on taking a gap year after matric
to see what I can do with my running, and then taking it from there. I want to
try qualify for the Olympic 10,000m in Rio 2016, or else I am going to work for
the marathon later, because the further I go, the stronger and faster I get!”

One thought on “Awesome Annie”