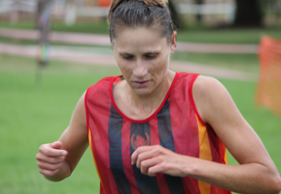 “I remember
crossing the finish and I thought it wasn’t real at all,” says Randfontein born-and-bred
Cornelia as she recounts her victorious day at this year’s SA Marathon Champs
in Oudtshoorn. “I was happy and shocked at the
result. I became the youngest champ ever, and this was my first ever marathon!”
Before that, Cornelia had focused on half marathons, but recently stepped up to
a few 32km races and done some longer training runs in preparation for her debut
marathon, which she won in a time of 2:46:13.

What makes Cornelia’s victory even more extraordinary is that she beat experienced marathon
runner and team mate Kim
Laxton, who seemed the favourite to take the title this year. Cornelia
remembers running to keep up with Kim to the 23km mark, but then she knew she
could pick it up. “In the last 19km or so I ran up front and I did not see her again
before her finish. I guess now that I have this victory at a young age, I can learn
from it and better myself and my times.” Kim came home in 2:47:25 for the
silver medal, while third place went to Melanie van Rooyen of in 2:48:35.

While her
win was still three minutes outside the women’s qualifying
standard of 2:43:00 for World Champs qualification, Cornelia says it’s a great
stepping stone for her. “It’s so positive for me after little time for
preparation. I want to get to the point where I can represent
and also get some sponsors so I can run overseas,” she says.

Cornelia has always been an athlete, having started running and
competing from the age of nine at primary school, where she participated in the
1 200m and 1 500m events. At the age of 11 she received her SA colours for the
first time and her talent continued to develop in high school, where she was
awarded further accolades for her running, and as her love of running grew, she
turned to cross-country and eventually road running, where she has blossomed. With
her great attitude towards the sport and her forthright humility, she was
pretty confident of running at a top level after school. “I trained on my own
for a while, but it didn’t fit with me,” she explains. “In the last four months
I’ve been with a coach who is pushing me for results and times, and picks out
the races in .”

At the moment, Cornelia holds personal bests of 35 minutes for 10km and
77 minutes for the half marathon, and is hoping to bring her times down soon, so
that sponsors will take notice. “That’s what you’ve got to do now – you have to
compete with the top runners, and get the results and times, so sponsors and
teams will get behind you.” She adds that she believes running can take her to
new heights and places she hasn’t been before. “I’d love to be able to compete
with the best and also run some races overseas! If I can get represented and
can improve, I will get there.”

Despite her optimistic outlook, Cornelia also hopes Athletics South
Africa gets their act together with paying athletes for their wins. “There’s a
lot of athletes not getting paid and looked after, so there needs to be a
change there. As an athlete you rely on winnings and the athletics body
standing up for you.”

During the week Cornelia trains on the track with her coach, including 1
000m intervals to work on her speed. She says bringing her times down on the
shorter distances is her priority. “I’m doing my first track champs soon and I
don’t know what to expect, but I have been working hard because I’ve been
struggling with running on the track.” On the weekends, she lines up regularly
at shorter local races on Saturdays, and does 30km long runs on Sundays. In the
recent Sarens Half Marathon in Edenvale, Cornelia grabbed a fifth placing with
a 1:23:24, and other notable runs in recent months include finishing as
runner-up in last year’s Ocean Basket/Marcel van’t Slot 15km, where she clocked
59:01, and a close second at the Jakaranda SABS Half Marathon in just over
1:22.

Having appointed a coach just a few weeks before the marathon champs,
Cornelia says that decision is really paying off. “If I don’t get my times, if
I’m struggling, my coach won’t put me down. He is always positive about my
running and that helps me when I compete!” she says. “It’s about eating
healthy, too! Of course, I cheat sometimes but you have to eat the right things
if you want to be better.”

Cornelia says that her current success is also thanks to her being able
to juggle being a mother to four-year-old Stephen and still fitting
in a lot of hard training. “It’s very hard to be a mom – when you have a
kid, you always have to run around anyway!” As for Stephen, he may still grow
up to be a runner as well, but Cornelia says she will let him choose his own
way. “I won’t push Stephen to run and compete one day – if he does, it will be
great, but it does take a lot of dedication!”

For an
up-and-coming star on SA’s running circuit, Cornelia stays grounded and relaxes
by singing at Karaoke nights once a week. “I get my mind off things when I’m singing
and performing,” she says. “You always need to do things besides running to
relax!” And while her status as a top runner is slowly growing, Cornelia says
she still looks up to Rene Kalmer as her role model on the big stage. “She’s my
favourite because she has talent, she has a beautiful personality, and gives out
advice easily!”

And so,
with fresh, young legs, heaps of talent and dreams of international races and
becoming a star name, Cornelia is definitely an athlete to watch for the future,
and her unassuming approach to the sport should see her go far and get the
times she trains so hard for. “I feel like one day I will be able to tell the
kids who want to run to never give up – even if you don’t win and struggle at
first!”