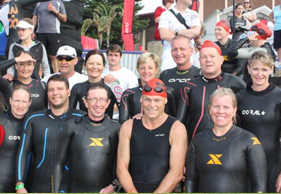 Modern
Athlete and triathlon coach Derick Marcisz started the Dare to Tri Academy in
August 2012 after a very successful inaugural Dare to Tri programme in 2011. In
that first year, 10 novice triathletes were trained and coached to Ironman
70.3. The inaugural programme was such a huge success that we decided to start
the Dare to Tri Academy, which gave everybody the opportunity to train under
the guidance of a triathlon coach and with like-minded athletes. Just over 40
triathletes signed up to the Academy, which promised to take them from novice
triathlete to Ironman 70.3 finisher in 2013, and what a journey it has been.

Training at the Academy started one month earlier (September)
than the previous year and one of the highlights of the
Dare to Tri programme was the instant bond that was formed between academy
members. It was great to see an initial bunch of strangers becoming friends
through the sport of triathlon, and it was clear that the common goal of
finishing Ironman 70.3 and a shared passion for the sport of triathlon bound
the athletes together. “I know it is a clich? to say that the journey is as
important as the destination, but this was really true!” says coach Derick
Marcisz to the Academy members. “If you enjoyed the training and the company of
your fellow triathletes during the last four months, then that is already a
good reason to have been part of the Dare to Tri Academy.”

Two of the highlights of the past training months included
the Total Immersion swimming workshop held at Bass Lake in the south of
Johannesburg. The workshop was hosted by Georgie Thomas, owner and operator of
Total Immersion South Africa and turned out to be a huge success. Thank you,
Georgie! The other highlight was the training triathlon held at the Vaal and
hosted by Dare to Tri Academy members Bryan and Juls Webster. 22 Academy
members took part and afterwards it was clear that they were all ready for
Ironman 70.3 South Africa.

Of the 42 triathletes who signed up at the Academy,
ten did not enter 70.3 or did not make the starting line due to a variety of
reasons, but many of them still trained and socialised with the group. Another
four triathletes that started 70.3 were not able to finish. “I know they will
be back next year to give 70.3 the payback it deserves. As the coach, I am
extremely proud of the 32 Dare to Tri triathletes that lined up on Orient Beach
on race day,” says Derick.

Below are the finishing times of the Dare to Tri
finishers:

In the team event, Peter Todd (swim) and Frank Saieva (bike
and run) finished in 6:47:43. They have both committed to the individual event
in 2014.

The DARE TO TRI ACADEMY has been a fantastic
initiative and the plan is to continue with this in 2014. Keep an eye on Modern
Athlete for more details.

Last year I didn’t get to finish 70.3 due to stomach
cramps and dehydration, so this year all I was aiming for was a finish. I
didn’t care what my time was, as long as I got to run down the red carpet. Race
morning broke and the nerves started. The swim was tough, but I was happy with
my time. The bike leg was windy and I kept my eye on the clock the whole way. I
knew that I would have to push the last few kays to make the cut-off. I dug
deep into a place that I didn’t even know I had. When I got to transition in
time I cried a little bit and sat in the tent before the run started, thinking
I’ve got this in the bag. I started running with tired legs, but a happy heart.
On the run I kept an eye out for my husband Johan and when I saw him it gave me
that little extra surge of energy I needed. Crossing the finish line, I cried a
lot, and getting to see Johan waiting for me at the end was an amazing feeling.
I’m proud to say that I completed the 70.3 in 8:19.

Regrettably I did not achieve my goal. I had a good
swim and the bike leg started well. Unfortunately, I had mechanical problems
from about 15km and my chain came off five times in the first half. I wasted
about 25 minutes on repairs and didn’t use the two lower gears in the second
half, so I missed the bike cut-off by 10 to 12 minutes. The good news is that I
felt strong, enjoyed the journey and will be back next year to complete 70.3!

70.3 was a dream come true! I did one BSG Triathlon
and did not finish at 11 Global due to panicking in the swim. After that, I did
more open water swims, which gave me more confidence for 70.3. Standing at the
start of the swim gave me goose bumps. This race changed me forever, and will
make every athlete humble. Race day, the vibe and the event, especially running
down the red carpet, was MAGIC! I finished in 7:11:46. Thanks to my mom for
everything leading up to the race and everybody else for the support. With much
more training, racing and experience under the belt, Orient Beach will see me
in 2014!

I missed the bike cut-off by seven minutes. I enjoyed
the swim, but the bike leg was a killer, and what made it worse was the wind
from the turn point. I am still licking my wounds, but am slowly making peace
with the disappointment and I’m ready to go back to the drawing board. Thanks
for all the support, it really meant a lot.

Our race started off with a big jolt! As we were
waiting for our wave to start, the medics carried one of the athletes who had
suffered a heart attack past us to the medical tent. This had a huge impact on
my wife Freda and my own mindset, as I had suffered a heart attack in September
last year. You can just imagine what went through our minds, as swimming is my
weakest discipline. However, we spoke about just staying relaxed, which we did
and ended up having a comfortable swim. The cycle leg went relatively well,
considering the huge hills that never seemed to end. Hills and head wind, not
easy. It was disappointing to see our cycle times afterwards, which showed that
we should have pushed a bit harder. However, in saying that, we did not want to
arrive for the run on dead legs!

The run was amazing with all the crowd support on the
beachfront. They ensured you kept going, no matter how tired the legs were.
Cramping was an issue, but whenever you wanted to stop, you were egged on by
the people on the side of the road. Running onto the red carpet was extremely
emotional. We had entered Ironman 70.3 a week before I suffered the heart
attack, and Freda and I only decided at the end of October that maybe it was
still possible to do the 70.3, so actually competing in and finishing the race
was huge for both of us. Training with the Dare to Tri group definitely ensured
that we would be fit enough to take on this huge task. Thanks to Derick and our
fellow DTT athletes for helping Freda and I to achieve this goal.

I wish I had results and an experience to share with you, but a
pelvic stress fracture that I picked up in December put paid to my dreams of
completing 70.3. I was forced to withdraw. I have already entered for 2014 and
am looking forward to an injury free year of training.

What an experience! It really helped to follow Derick’s program
as I was not only physically, but also mentally prepared. All the prayers from
friends and family helped me to keep calm and collective on race day. I
visualized the swim, bike and run throughout the week and focused
on enjoying every moment of the race. I kept on reminding myself that
I did not spend the last 4 months of training just to stress about  race day. On the day I started the swim by
walking into the ocean as if I was going for a swim, first getting used to the
water temperature. I noticed that I was last of my age group to start the
swim, but it didn’t bother me at all. I was going to start this race
relaxed and comfortable. I had a good bike and started the run slow, but finished
the run fast. I crossed the line in 7:00.36. What a great day!

I
enjoyed the race although it was quite tough with strong winds on the bike and
hot weather on the run. I had to take sponges at each water point to cool down
during the run. Unfortunately my wife Helena, missed the cut off on the bike leg
again by a mere 5 minutes. I therefore have mixed feelings about the event. We
will definitely be back next year to get her medal! My finishing time was 6:49:04.