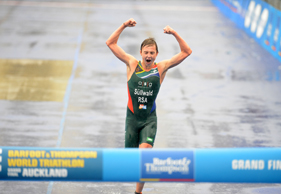 Growing up on a farm in Warmbaths, Wian was always
outdoors, but after suffering from asthma at a young age, the doctors
recommended a simple solution to better his breathing: Get into the pool. “I
started swimming and my coach saw something in me,” says Wian. “Also, I was
always active as a kid – I ran everywhere before I walked anywhere.” Added to
that, Wian’s parents were avid cyclists, and when they introduced him to the
bike, to go with his raw talent in swimming and comfort in running any
distance, it soon became obvious that he was born to be a triathlete.

“At first I competed in all disciplines separately,”
Wian explains, “but then I saw triathlon on TV and fell in love with the sport,
knowing I could do well. At 15, I was already taking part in my first SA
Champs.” At 17, he finished eighth at the Youth Olympics, then secured a third place
in the 2011 All Africa Games, and that motivated him to train harder, and to be
faster and more focused coming into the 2012 season. That saw him claim a win in March at the SA Triathlon
Champs in Port Elizabeth (as an elite!), grab a win in the ETU Cup in
Slovenia, and then record his big win at the World Champs in New Zealand.

Wian went across to New Zealand two weeks before the
World Champs to adapt to the 11-hour time difference and the unpredictable
weather. But when race day came around, he still had to contend with an extremely
challenging race day. “The water was only 15 degrees, the rain was coming down
hard, and the roads were wet, but I just kept my concentration from the start.
Also, I knew that there were at least 15 athletes that could pull off the win,
because that level is hard. You push yourself to the brink, but even with all
the elements that were out there on race day, I knew I had the training,
mentality and game plan,” he says.

After some pulling and fighting up front, Wian found
the leaders in the water and exited the 750m swim in the top 10, and it
remained tough-going all the way through the race. Despite the pouring rain and
three steep climbs, Wian revelled in the difficult conditions and stayed on his
bike for the 20km leg despite numerous crashes around him. Coming into the
second transition, his legs felt good and he pulled clear of France’s Simon Viain and Ireland’s Constantine
Doherty on the second of two 2.5km laps to become the first ITU World Champion
from Africa at junior, u/23 and elite level in 1:01:44.

“It’s hard to explain the
win,” says Wian, “it was an incredible feeling and I remember jumping around.
It was a dream for me from the beginning and I kept fantasising about the win
after months of hard training.” He was also lucky enough to see his parents at
the finish line – the support system he has enjoyed and appreciated from the
beginning. “They bend over backwards for me. They only sometimes travel with me,
but they were there at the win, so it was special. They’re also athletes, so
they always support me 100%.”

Wian’s win was just
reward for the hectic training schedule he follows. Depending on the time of
season, he trains 30 hours a week, including 12 hours on the bike, running 5km
to 8km each session, and often doing between 20km and 30km in the pool at the
High Performance Centre in Pretoria. While focusing on specific swim, run and
bike sessions, Wian also dedicates some time to core strength work, and of
course, he makes sure he eats right. “I always say, if you don’t put the right
petrol in your car, it won’t go, and as an athlete you need to get in proper
food!”

After a long season
(February to November), Wian cherishes some downtime at the farm in December
and January, doing chores, hanging out with friends and family, and watching
movies – anything a regular teenager would do! But now, having taken a short
break after his terrific 2012 season, Wian has set both short-term and
long-term goals for 2013 and beyond. “I have a few international races coming
up and I’m planning to get to the Rio Olympics in a few years, with lots of
planning and focus!”

Wian says he can see the
sport of triathlon slowly growing in South Africa, and with good results from
locals on the international stage, he hopes there will be still more
development. “You see athletes like Richard Murray and others getting great
wins and it gets more people interested to compete, and slowly the local races
are getting bigger and better, which is great to see.” He adds that triathlon
is not just a sport for him, it’s a lifestyle he chose and a job he loves to
do. “I’m fortunate enough to do it. There are obviously bad days when I’m tired
and sore and I think of what else I could do, but then I think about how lucky
I am to do what I absolutely love!”