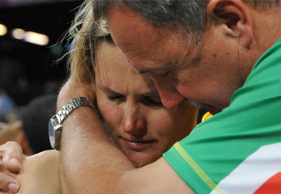 Energetic sport junkie Sunette grew up in Rustenburg and dabbled in
cricket, rugby, tennis, athletics and netball at school. She had a naturally strong
arm and flourished on the cricket field, playing in 17 ODI’s and 1 test match for the South African women’s’
cricket team when she was 16 and 17. “Then in 2002 I received a bursary from
the NWU-PUKKE, where my athletics career started with my coach Terseus
Liebenberg.” The rest is history…

Sunette now holds
the South African, African and Commonwealth javelin record with a mighty 69.35m
throw. She was African Champion in 2004, 2008 and 2010, won gold at the
Commonwealth Games in 2006 and 2010, and in 2009 and 2011 also picked up wins
in the World Student Games. Last year, she claimed a bronze medal in the World
Championships, so her sights were firmly set on medalling in London in her
first shot at the Olympics.

Having easily
negotiated the qualifying round, Sunette’s first throw of 64.53m in the final would
prove be her best, and unfortunately short of Germany’s Linda Stahl, who
clinched bronze with 64.91m. The Czech Republic’s Barbora
Spotakova clinched gold with 69.55m, which also propelled her above Sunette’s
number one world ranking for the year. “London 2012 can be divided into
two emotions: Extreme happiness after qualifying with my first throw and then
extreme disappointment after finishing fourth in the final,” says Sunette. “I
wanted to win a medal with everything inside of me, but my destiny was fourth place.
I still take a lot of pride in that, as I have never been an Olympic finalist
before. I still have a lot of fight inside of me and very big dreams to fulfil.”

For a javelin
superstar, strength training and technique drills are essential, and Sunette
says she was working out 30 to 35 hours a week and pushing her body to the
limit in every session to prepare for London. “I have never trained so hard in
my life! But to be a world class javelin thrower, you have to go the extra mile
to deliver the big distances.” She also included a lot of running and intense
cardiovascular work in her training to condition her endurance and fitness. “It
helps me with my focus during the competition. The fitter I am, the longer I can
concentrate and further I can throw.”

Another
important part of Sunette’s rise to success has been the support of family and
friends at home. “I have lovely parents, a wonderful son, as well as a great
brother and sister, who all support me in every aspect of my life,” she says.
“Spending time with my family is vital, because I’m away on javelin duty for a
big part of the year.”

Given her
drive and passion, it is not surprising to hear that just missing out in London
has just motivated Sunette to work even harder. Apart from the big goal of medalling
at the Rio Games in 2016, she has set her sights on the two World Championship
meets and the Commonwealth Games before her next Olympic shot, as well as the
world record. “I want to be the first women to throw over 70 metres, and I want
to win a World Championship gold medal, an Olympic gold and another
Commonwealth Games gold. I want those three titles!”