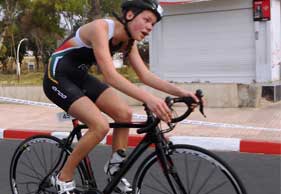 After
coming stone-last at a compulsory school cross-country event when she was in
grade four, Robyn-Leigh’s father gave her some valuable advice: Never stop
trying, and never stop improving. He was a runner himself, while her mom was a
swimmer back in the day, and soon Robyn-Leigh’s obvious sporting genes came to
the fore. “I started getting better as a runner, then started getting into
biathle two years after that, and in my grade seven year I got into the
provincial and national team,” she says. (Biathle consists of run, swim and run
legs.)

Robyn-Leigh says her first taste of
international competition was hard. “Getting into international competition was
more about experience at the beginning. It was definitely scary! The athletes
were bigger and there was a huge gap between us South Africans and .” But she says she learnt everything she could and
trained harder, and so, having come first in the Central Gauteng Biathle Champs
last year and first in the SA Champs, she was selected to represent at the Biathle World Championships
in in
2012, where she placed second in her age category.

Today
Robyn-Leigh is an accomplished star in both biathle and duathlon (run,bike,
run), and recently moved into triathlon (swim, bike, run) as well. While she says
she has no outright favourite discipline, she is really enjoying her running
more as she is improving on her speed. And this year, that speed helped her finish
second in the Potchefstroom ATU Duathlon African Championships, which saw her selected
for the SA team in August’s Ottawa ITU Duathlon World Championships in . She
also finished fifth overall in the 2013 ATU Triathlon Championships held in
East London in March, and was chosen to compete in the ATU Triathlon African
Champs held in Agadir, Morocco, where she won the bronze medal in the women’s
junior race. Then in June, she placed fourth overall at the SA Biathle Champs
after just recovering from flu she picked up in .

At
the time of going to print, Robyn-Leigh was travelling to Istanbul for the ETU
Triathlon Junior European Cup, followed by the Tiszaujvaros ETU Triathlon
Junior European Cup in Hungary, which are races traditionally used by athletes
from all around the world to prepare for the ITU World Championships, which
will be held in September in London. Robyn-Leigh has thus foregone the
opportunity to race in the Duathlon World Champs in favour of getting better
exposure in the European triathlon races and possible inclusion in the SA World
Cup squad, while getting a good indication of where she ranks amongst the
world’s best in her age group. “I want to get the results and the exposure, I
want to get my name out there,” she says, “While Rio 2016 is a huge ask, I’ll
be prepared for anything that comes my way.”

For
a young pro athlete like Robyn-Leigh, there isn’t much opportunity for normal
teenage ‘chill time.’ In the week, she tackles an hour-long run in the
afternoon after school – a steady 5km to 7km – and then spends a further two
hours after that in the pool, depending on the season, which also sees her
doing specific sessions for endurance on cross-country routes as well as 200m,
600m and 800m track sessions to up her speed. “On weekends my dad and I go out
for a more relaxed cycle session and I do have some breaks to recover, because I think that’s very important!” She
does have most Sundays off for family time and her coach makes sure she has
down-time with friends. “I do the normal stuff I should do, like homework,
friends and catching up on TV. You can’t burn out.”

Before
leaving for ,
Robyn-Leigh was focusing more on her cycling, which is the one discipline she
feels she can still improve. Over the past seasons she has also learnt to plan
her carbs and protein intake before a competition and to hydrate properly during
race day. “I remain very positive and have always had amazing support from my
parents, two sisters, coaches as well as my school, St. Dunstan’s College. My
parents are there at the finish line and that’s always a massive relief for me.
At home, there are medals and newspaper clippings of me from competitions, and I
keep telling my mom ‘No more! My room is full!’” she jokes.

For
this young athlete, discipline and passion are the two factors that any
promising talent needs, but she rates fun just as highly, and has made a point
of making new friends on the international circuit, many of whom have become
regular opponents in subsequent meets. “What’s the point if you don’t love what
you do? You have to have fun, too! You have to stay positive and motivated, no
matter what, and the results will come.”

WHAT THEY
SAY ABOUT ROBYN-LEIGH

Zinto Sports
(sponsor):
“She’s an up-and-coming star in the sport and she’s readying herself for future
Olympic competition. It’s a pleasure to sponsor her entries, trips and
equipment, and hopefully more of her results will catch the attention of more
sponsors!”

Darryl Jones (father):
“The
sport is obviously a very expensive one to get into, so we do everything we can
for Robyn-Leigh. You need a backing in this sport to grow and develop, besides
the hard work and belief.”

Cass Jones (mother): “We
support every decision Robyn-Leigh makes and we’re very proud of her
achievements. We believe in her and in turn she believes in herself and her
ability. We push her to do her best in life.”