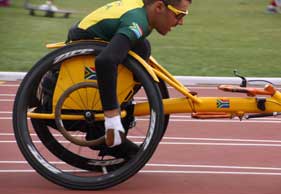 He knew something was seriously wrong as he lay there on the tar, unable
to move, and yet Pieter du Preez was still the one keeping everyone around him
calm; from the motorist who just knocked him off his bike, to the shocked
crowd. Firstly, he told the motorist that she should stop crying and that he
forgave her, because everything happens for a reason. Then he asked someone to
please phone his dad, as he would be the calmer family member to deal with the
situation.

Pieter was admitted to hospital in a life-threatening condition and
spent 42 days in the ICU. For the first 32 days of that, the doctors kept him in
an induced coma, and breathing on a ventilator. When he came round and found himself
paralysed, he made a promise to himself: Within one year he would learn how to
be totally independent, and he would find a way to do sport again, whatever it took,
and in whatever form. But SupaPiet did so much more than just ‘do sport’ again…
he has become an inspiration to many people worldwide!

On 11 May this year, Pieter made history when he became the world’s
first C6 quadriplegic to complete a Half Ironman triathlon event, finishing the
Busselton 70.3 in Australia in six hours and 37 minutes. He completed the 1.9km
swim in 54 minutes by swimming backstroke with a guide tapping his feet to help
him keep direction and as a safety measure. The 90km bike leg, which Pieter
describes as his weakest discipline, took him 3:55 to complete on his hand
bike. He then went on to complete the 21km run leg in 1:33, again using his
hand bike, and beating more than 150 able-bodied athletes to the finish line.

“It was the most amazing thing I have ever done!” says Pieter. “Before
the race I just wanted to finish, but afterwards I realised I could have
actually finished in close to six hours! One of my first thoughts was that I am
only halfway. Now I can take on Full Ironman.”

Growing up in Randburg, Pieter was always a gifted athlete. He excelled
at all sports and achieved provincial colours in running and duathlon. After
school he studied BSc in Actuarial Sciences at the University of Johannesburg
before moving on to a part-time Honours degree in investment management. His
love for sport continued throughout his student years, when he earned South
African colours in triathlon as well as SA Student colours in cycling in 2001.

When the accident happened on 6 October 2003, Pieter was on his way to
the chiropractor to sort out a niggling injury. He had decided to cover his
60km training ride for the day by cycling there and back. Then tragedy struck.
“An elderly lady drove right into me. Many people can’t understand why I am not
bitter, but I believe that day I had angels with me. It was amazing how calm I
was, though I had broken my neck, femur, knee and wrists.”

The accident left Pieter paralysed from his nipples down. The only
movement he has is in his shoulders and biceps. He has no tricep movement, and
though he can move his wrists, his hands don’t function. He can’t feel pain,
heat or cold, and his nervous system has been affected to the extent that he
does not sweat. “From day one in ICU, my faith in God saved me. While I was in
rehab they wanted to give me anti-depressants to help me cope, but I did not
take them. Every day I refused that little pill and said as long as I have my
faith, I will be fine,” says Pieter. “It’s been 10 years since the accident and
not one day have I had an ‘off day’ because I am in a wheelchair. Sure, I have
had off days when taxi’s drive in front of me, or a bad day at work, but not
because of my accident.”

TAKING HIS
LIFE BACK

Pieter was released from hospital on 23 February 2004 and barely two
weeks later, on 9 March, he wrote his final Honours exam. “It was tough, but I
managed to graduate with my class.” Shortly after that, he decided his next big
goal was to gain independence. Today Pieter is totally independent. He baths
and dresses himself and if needs be, can go away for a weekend and look after
himself 100%. “I had to find little ways and tricks in my quest for
independence, for instance, how to put my socks on even though I can’t move my
fingers,” he says. “I suppose I looked like a useless quad and I guess my
parents did not know where I was going to find a job, but they were always
supportive of me, even when I told them that I would find a way to participate in
triathlons again.”

A year after his release from hospital, Pieter started off with
wheelchair rugby, in which he represented South Africa in 2005 in Rio. In the
same year he got a job at Deloitte, where he still works as a senior actuarial
analyst in the Actuarial and Insurance Solutions Division. “Deloitte has been
amazing and has supported and sponsored me in all my sporting endeavours. The
whole company has been behind me, and I can’t thank them enough for what they
have done for me.” He started working towards getting back into triathlon by
first researching sporting equipment he could use, then he started cycling
before tackling his first marathon in
in 2008. That same year he married Ilse, an occupational therapist. “She is my
biggest supporter and helper on race day. We are a team,” says Pieter.

His dream was realised when he became one of the first quadriplegics
ever to complete an Olympic-distance triathlon in 2010. In the same year he
made the SA hand cycle team and represented his country at the World Cup in
Spain. Later that year he finished the 94.7 Cycle Challenge with Ilse, before earning
a silver and bronze medal on the track in the 100m and 200m sprints at the IPC
(International Paralympic Committee) World Champs in New Zealand. Then another
of his dreams was realised in August 2012, when he represented SA in the 100m
at the London Paralympics.

A CUT ABOVE
THE REST

It was just after the Paralympics that he set his sights on
participating in a Half Ironman event. “I had to find a race with a flat route,
as the bike is always my drawback, but just the idea of competing was mind-blowing,”
says Pieter. And having conquered the 70.3, he immediately set his sights still
higher. “On the way back from Half Ironman, I said to Ilse, now it is time to
set a date for full Ironman!”

And so Pieter has chosen the Busselton Full Ironman in Australia on 8
December. One of his worries is that the race extends into the night, which
might complicate things for him due to his deteriorating eyesight. He suffers
from a hereditary eye condition, which will eventually
see him becoming blind, but he is determined to see it through and become the
first quadriplegic to complete a full Ironman.

When chatting to Pieter, one quickly realises that he is a cut above the
rest. He is not only positive, but has a great sense of humour and an
unshakeable faith that this is the path that was chosen for him. “I believe to
inspire creates a circle effect. I know I inspire people through what I do, but
what they don’t realise is that when they come to me and congratulate me, that
in turn inspires me to carry on!” he says. “If I could have any words of advice
for anyone, it would be for people to be nice to each other. And if someone
means something to you, go and tell them that. Finally, I would say this: The
impossible is possible!”