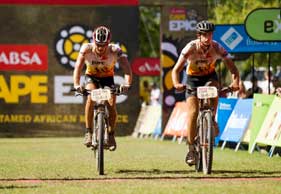 The London
Olympics will always be a special memory for Matt, who alongside teammates
James Thompson, Sizwe Ndlovu and John Smith landed gold ahead of hosts and . “It’s amazing to hear
stories of people back in SA telling me exactly where they were when we won the
gold,” says the Jo’burg-born rower. “And when we saw ourselves on the front
pages, it was so bizarre!”

Matt was introduced
to rowing as a boy because his father was an international rower and had a
passion for the sport. After competing at school, Matt moved to to study economics and join the rowing academy at
Tuks, and in 2011 he was part of the SA team that qualified for . “The top 11 crews
qualify and we came 11th!” says Matt. “But I knew I didn’t want to
just go to
to be a tourist – I wanted to work hard and do well.”

On the day
of the Olympic final, the anthem was running through Matt’s head and he
couldn’t help but thinking about a medal. “At 250m to go, the buoys turned red
and we knew it was time to sprint early. I make the calls, so I told the guys to
go for gold. They all shouted ‘Gold!’ I remember seeing ‘1 RSA’ on the board
and I just started screaming! I doubt that moment can be recreated.”

While will always be career
highlight, Matt says he is determined to achieve more in rowing. “You can’t
compare your future to the Olympics – you have to look for something new and rewarding,
and how you can attack your next race.” Unfortunately, he has had to put rowing
on the backburner in 2013 due to injury: “Back in 2010, I had an op on a
prolapsed back disc, and now I’ve hurt another,” he explains, “but I haven’t
stopped training, even though I’m taking a year off from rowing.”

Instead, Matt
is now focusing on cycling to maintain his fitness, and he’s doing pretty well
at it, too: He completed this year’s ABSA Cape Epic alongside fellow Olympic
gold medallist James Thompson, finishing 33rd overall, and also took
sixth position in the recent Joburg2c mountain bike tour with Rob Dormehl. Not
too shabby for a rower – although he says he is still getting used to training
by himself instead of a team.

In the
lead-up to ,
the team would do two rowing sessions a day, plus a midday gym workout, and they
would run three 10km sessions a week. “We use running to push our weight down
to 70kg before a competition, but also, when we’re overseas and our hotel isn’t
close to water, it’s nice to be able to go out and run.” In spite of the injury
and shift of focus this year, Matt is nevertheless still putting in the hard
yards on the water. “Now I’m training twice a day and take Sundays off, whereas
before we were training three times a day with every fifth Sunday off! I
sometimes think other pro athletes are crazy, but then I look at my own training
and figure I’m pretty crazy too!”