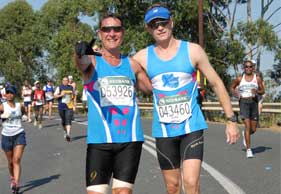 It all started at the beginning of 2011, when I
relocated from to start a new and challenging career in . I soon found
it very lonely, despite being in such a big city, and after months of pouring
myself into my work, I realised that the city had become too much for me and
that my work had become my closest friend. So I moved to the outskirts of
Delmas, close enough to commute to
but far enough from the hustle and bustle of the city. It was here where I
could get on a bicycle and ride for hours through the mealie fields and dirt
roads, reminding me of my childhood and just how much I missed being so free.

COMRADES RUNNER IN THE MAKING

A friend of mine from Pietermaritzburg needed help
with the handing out of medals at the finish line of Comrades 2012, and it was
the first time ever that I attended such a huge running event. After the last competitor finished, I set my
sights on running Comrades 2013. I also wanted to be an athlete, a competitor, and
a part of something good and beautiful, though I weighed 127kg at that stage!

But as the winter of 2012 arrived my excitement for
Comrades had disappeared. That which I desired so much had disappeared along
with the summer sun. Luckily for me, Juan Van Dyk, a friend I met on Facebook,
and his wonderful wife, Pierretta, invited me to participate in numerous winter
trail events and it was in the freezing cold bushveld where I rediscovered my
love for running.

Juan and Pierretta became more like family and I let
my good friends know that my biggest dream was to run Comrades. Shortly
afterwards, I received an e-mail from Juan with a training programme attached and
I suddenly realised that true friendship was the belief in the abilities of our
friends. I started losing weight and getting fit. It was not always easy, but I
was focused on the end result.

Kilometre after kilometre of travelling to races,
early mornings and late nights kept me on track. My running partner truly stood
by me, advised me, taught me and believed in me, and made me the runner I am
today. There were good days and there were bad days, but it was only one more
piece of the puzzle in gaining the experience I desperately needed to complete The
Ultimate Human Race. And so, on 2 June this year, I achieved my dream and
completed Comrades in a time of 10:33.

I want to give back that which I had received in the
past 11 months, and therefore today I run for
for Jesus (S4J), an organisation that helps to collect money for . Our
entire club also runs for ex-Springbok Joost Van der Westhuizen, and his J9
Foundation. We are trying to raise funds for the foundation and make athletes
aware of the illness Joost is battling with.

I have learnt many lessons along the way:

?
Cherish and love the
people in your life who are there to help you.

?
If you are not
capable of doing something, assist those who are.

?
Give back as much as
possible.

?
Remember: People are
in your life for a reason, or a season – or for always.