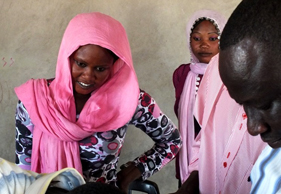 Norman and Pedri are accustomed to the immense
challenge and unpredictability of Comrades, and both are motivated to encourage
others to give back. Norman has run Comrades twice while Pedri is a more
experienced runner with 11 Comrades finishes under his belt, including an
impressive best of 6:53. “It’s simple for us,” says Pedri, “running to give
back is an opportunity for us to do what we love. We combine our love of Jesus
and our love of running!”

For Pedri and Norman, the Sudan4Jesus (S4J) initiative
strives to implement a ‘buddy system’ every year where Comrades Marathon
runners who are members will nominate a ‘buddy’ (athlete or not) to help them
with their journey. “A runner has a buddy who inspires and helps throughout the
journey,” explains Norman. “To run the Comrades, one commits and has to juggle
work, family, training and fundraising, so it always helps to have someone with
you.”

Given the campaign’s rapid growth, Pedri and Norman now
encourage an average of R5 000 raised per athlete with a target of signing up 100
athletes for Comrades 2013 and beyond. Near the end of 2012, they were well on
their way, with 85 runners from 20 different running clubs having committed! Included
in this 2013 Up Run S4J team is seasoned Comrades runner Louis Massyn, who has
run 40 consecutive Comrades, as well as the 2012 Washie 100-miler winner Johan
Van Der Merwe.

For Pedri and Norman, the S4J campaign is not just
about raising funds, they are hands-on when it comes to bringing the gospel to
communities who haven’t heard it before, supplying ministry tools, and participating
in outreach projects like painting schools in the area. Apart from their
personal religious duty, S4J is also a humanitarian project. “It’s amazing to
see the funding available to see our strategy work,” say Norman. “We can speak
out on behalf of those who cannot, because the reality is that the country is
still full of conflict and the government’s reign is violent.”

The duo believe that some runners have the natural DNA
to want to give back and make a greater impact for change. “It’s about Comrades
and giving back,” Pedri explains, “and at the finish of Comrades 2013, we’ll
have a community at our stand and we’ll all celebrate!”

For more information about S4J and how to get
involved, visit www.sudan4jesus.com and www.sudanpartners.org, or call Pedri on
012 460 5153.