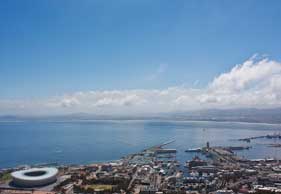 On a global
scale, modern lifestyles generally reduce opportunities to lace up and hit the
road. Not only do we have less time for exercise these days, but there also
seem to be less outdoor leisure facilities where one can train safely and
effectively, and we often blame government for the lack of choice out there.
The study is looking to change that, by
not only putting a spotlight on a city’s overall fitness and activity levels,
but also helping to facilitate an improvement in urban planning that can
contribute to a city getting fitter. “We would like the index to act as a
motivation to encourage people to find opportunities to move more or sit less,
so that they can get moving for their health,” says Dr Tracy Kolbe-Alexander, a
biokineticist who co-conceptualised the study.

Data for
the study was collected from reliable, publicly available resources and
research, and divided into: personal health, physical activity, transport and
sports facilities. And this is how our cities ranked:

(Based on BMI, high blood pressure
and high cholesterol)

(Representation of the use of
non-motorised or public transport)

After
putting all the data together, the study concluded that trumps most other cities with its
public transport and facilities. For example, the
’s cycle path between and Milnerton is one way that
residents are looking to get fit while commuting. Meanwhile, residents in the
Bay enjoy the country’s top reported physical activity, and thus, came out on top of the overall rankings,
followed by :

While has a lot to work
on, there are walkers, runners and cyclists that make daily use of the
promenade and water enthusiasts often enjoy snorkelling and windsurfing at
Vetch’s Pier. This year’s Discovery East Coast Radio Big Walk, with a record field
of 33 500 entrants, is also a great event that brings the residents out en
masse. While Jozi rates quite low overall, the use of the Gautrain and the Rea
Vaya Bus system helps reduce the city’s carbon footprint, and outdoor gyms in
public parks have been erected in ,
Diepsloot and , but there is loads
more work to be done! On the other hand,
does boast many great races each week, so there is an opportunity for more people
to get active.

For a city
to improve its ‘fit and healthy’ status, it has to create an environment that
encourages movement. There need to be policies in education, transportation,
parks and recreation, media and business that boost how much we move. For
example, in , the city has developed a
series of new green spaces, parks and playing fields. By ‘greening’ the city,
the city has become safer, which encourages more citizens to cycle and run in
the city. Here in SA, our cities could do the following to achieve the same goals:

?
Beat
the traffic: Better bus services will encourage citizens to be less dependent
on their cars.

?
Starts
at school: Playgrounds and sports fields need to be improved.

?
Keep
it clean, keep it safe: A clean and safe neighbourhood encourages more running
and cycling.

?
Creating
the track: Cycle lanes on busy streets or designated times in slow lanes for
cyclists promote bicycle use.