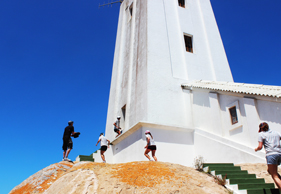 “It
was the best of times and the worst of times,” says Retha Schutte, who teamed
up with friends Machelle Bremer, Lindsay van Aswegen and Lena Faber to take on
the gruelling challenge of running from Umhlanga to Cape Columbine in 42 days
in November-December last year. “Physically we were all in good shape, but
emotionally it was very tough,” she explains. “The whole trip was humbling, and
we have so much to be grateful for.”

THE NEED TO SHED LIGHT

The
team wanted to spread awareness about their cause on their running journey, so
with a community service team in place, comprising Retha’s husband Herman, life
coach Kudzai Shoko and clinical psychologist Eugene
Viljoen, they visited township schools and abused homes, chatting
to women and children affected by abuse. “Nobody knows how big the need is,”
says Retha. “Every 17 hours a rhino is killed in this country, but nobody knows
that every 17 seconds abuse and rape occurs! There needs to be more focus on
that.”

Not
only did the team give up their time to listen to the stories of the victims,
but they gave back where they could. “In Umtata, for example, we saw their
biggest need was pots, pans and a DVD player,” says Retha, “so we contributed
that and it made a difference, however small.” It was an emotional experience
for Machelle and Lindsay, too. “Visiting the homes was an emotional
rollercoaster,” says Machelle. “We’d have such a runner’s high after our run,
and then go into the homes and our hearts would break, which would bring our
feet back to earth.” Lindsay, too, felt fortunate after meeting the victims and
pointed out a simple need: “Children just want to be held,” she says, “while strangers
identified with us and took the time to tell their stories, which is a small
help to them.”

Before
bedtime each night, the team would set out each runner’s leg for the next day’s
route. Starting at 4:15am, the days sometimes stretched until 11pm, as the team
had to set up camp at various stages. They also sometimes had to hike up
mountains after their long day’s running to physically touch one of the
lighthouses, but it was still a definite relief when the team got to that ‘touching’
stage of the day. “Just like a woman in an abusive relationship, a runner goes through
a lot of ups and downs on a long run,” says Retha, “so it was a tiring,
frustrating, emotional six weeks, but an exceptional experience.”

While
there were some running clubs and individual athletes that joined the team for
various parts of the run, Retha hopes there will be more involvement from
runners in the future. Also, on route the team was approached by locals who had
heard of the cause, and wanted to know more, or make a contribution. “One
cyclist passing us even gave us R80 for the cause – it was such a surprise!”
says Lindsay.

“The
main thing is to challenge runners,” says Retha. “Charity starts at home, so
look at your community and how you can give back. It can be something simple,
like your old shoes or pillows. Some people just need someone to listen.” And
that need is ongoing, so the team won’t be stopping now that their run is
complete. “It’s not an issue only in South Africa, but worldwide,” says
Lindsay. “Usually, no one realises what’s going on in the home. We are too busy
to realise that there are scary things happening in our communities.”