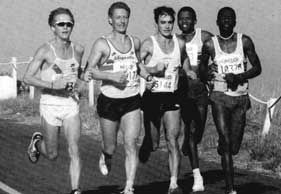 Eloi
De Oliveira can look back on quite some running career: A Comrades gold and 21
silvers, two gold medals in the Two Oceans (including third in 1989) on top of
18 silvers, a marathon PB of 2:18, plus several SA Champs titles and many KZN
provincial titles from cross country to the marathon, from under-19 level right
up to the Master (50-59) category. Today, at 55, he is still running
competitively, alongside his slightly more famous wife Grace, herself a
multiple Comrades and Two Oceans gold medallist. “We’re not as competitive
these days, but for me, the obvious goal is to win my age category, or push
myself to at least try beat the 40-year-olds!” says Eloi.

Born
in Portugal in 1958, Eloi moved to South Africa when his father found
construction work here in 1966. Ironically, Grace hailed from a village just
5km from his own, but the families did not meet until they became next door
neighbours in Durban, where Grace soon became best friends with Eloi’s sister
Fatima. “Grace invited me to her matric dance and we corresponded for two years
while I was in the army, then married in 1983 – and then she had to start
running, too!” says Eloi. They have a daughter Daniela, now 24, who regularly
accompanied them to races when she was younger and has a good few runs under
belt as well.

Eloi
began running at school, joined Savages Athletic Club while studying
engineering, and then ran his first Comrades in 1980 while doing national
service. “I applied to run it, despite my training being limited to regular 2.4km
runs with rifle and boots, because I thought it would be a nice week away from
camp.” He ran 6:58:00 and has never finished slower than 6:59 in 22 Comrades. After
the army, Eloi worked for Eskom, which led to a lecturing job at a technical
college. “Then in 1987 I was sent to UCT to do a teaching qualification, which
I followed up with a Masters in Education at UKZN, and I now teach high school
mathematics in Durban.”

Eloi
was another of the talented SA runners whose best years in the 80s unfortunately
coincided with the sporting isolation years due to Apartheid. “I did run for
the Junior Springboks in Cross-country in 1986, but by the time SA was back in
international competition, I was getting long in the tooth. Grace went on to
represent SA a few times, and I am immensely proud of everything she achieved.”

After
many years of injury-free running, calf and hamstring problems have sidelined
Eloi for much of the last two years, but he says he is still motivated to run.
“There are days I feel that I’ve had 40 years of this and it’s time to retire
and only run socially, but my competitive nature keeps me racing. So in a few
years time I will be looking for titles in the grandmaster category!”