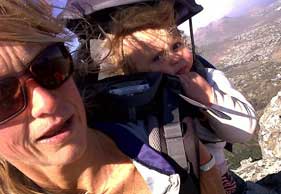 In 1997 she burst onto the Comrades scene, finishing
fifth woman (and second South African) in a time of 6:45:51 in her first
attempt at the race. Despite having finished in the top 20 at the Two Oceans
ultra five times from 1991 to 1995, and again in 1997, even she was surprised
by her performance. “I remember coming on to the field and seeing the time, and
then thinking the clock must be wrong!” says Charlotte.

That result saw her selected for the SA team for the
1997 World 100km Champs in Holland, where she finished an excellent fifth. The
1998 Comrades didn’t go quite as well, despite a creditable 21st position,
but in 1999 Charlotte was 10th and back amongst the gold medals, and
back in the SA World Champs team, finishing 14th and first SA woman in
Japan. Then, after bailing the 2000 World Champs race due to illness, she
decided to withdraw from competitive running. “I had grown tired of competing
and training so hard, and decided to focus on climbing, surfing and body
boarding. I never stopped running, I just didn’t want to compete any more.
Also, I had gotten married in 1999 and we decided it was time to start a
family.”

Today Charlotte (47) lives in Scarborough on the Cape
Peninsula with husband Andy De Klerk and their four kids, Sebastian (11), Clea
(9) and the five-year-old twins, Anna and Francis. Having studied medicine, she
works for the City of Cape Town as a GP at the Ocean View Clinic, and to
relieve stress and maintain her health, she still runs seven days a week. “I do
most of my running on tar, and take my running shoes everywhere so I can build
running into my daily programme, but I’m also up on the mountain once or twice
a week with the dogs.”

Charlotte was born and raised in Pretoria. After
school she moved to Cape Town to study at the UCT Medical School, planning to
specialise in paediatrics, but she says running took her in another direction.
“I worked fantastically hard for Matric, and at the same time started running
to take time out from studying. My school didn’t offer athletics, though, so I
just ran for myself. Then when I came to UCT in 1984, I found they had a really
good running club, and I began to take it more seriously. I ran my first
marathon that year, clocking 3:40, and began competing in cross country, but I
didn’t think I was a good runner then.”

She was at UCT for six years, followed by a year-long
internship in East London, then took a year off to travel overseas. “I ran
everywhere I went, because it’s a great way to see and experience places. For a
while I worked in a vineyard in France, and I would run to work each day,” she
says. Upon returning to SA in 1992, she began practicing medicine, but it
wasn’t long before her wanderlust returned. “In 1994 I did a six-week trip to
Peru and was given a crash-course in Alpine mountain climbing. When I came
back, I saw an advertisement for the planned 1996 SA Everest expedition, and I
applied.”

Although short-listed alongside the country’s top
female climbers, Charlotte was not selected, but she was then asked to join the
expedition as team doctor, and went with the team to Base Camp. Unfortunately, a
much-publicised falling out with expedition leader Ian Woodall saw her and
three of the climbers leave the team, including her future husband. Instead,
she joined a climbing expedition to Antarctica later that year.

It was then that Charlotte saw her running begin to
flourish. “Early in 1996 I had run a fast time in the Constantia Village 15km
and was approached by Frans Pienaar, who offered to coach me. Later that year I
ran a 2:56 in the Peninsula Marathon and made the Western Province team. Then
in early 1997 I was doing a diploma in Bloemfontein, so I decided on the spur
of the moment to move to Pretoria to train for Comrades with Nick Bester’s
group. The training went well, but I didn’t realise just how good my form was. Perhaps
all that high altitude work and time in the mountains contributed to my running
success in the next few years. At least, my family believes that is the case.”