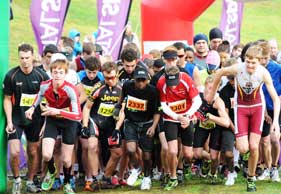 Jessica convinced me that this event would be fun to do, so I thought
why not give it a go? My mindset was pretty much to enjoy it, give it a good go,
but to have fun and not take it overly serious. I didn’t think that I could actually
win it!

The conditions for the run were very good, even though it was pouring on
the morning, but then as soon as we got on to the bikes and went into that
forest, things got very muddy and watery. Luckily the sun had come out, so we
weren’t too cold. The conditions in the forest favoured me, as I have a
cross-country background – I won the SA MTB Half Marathon Junior Champs in 2012
and 2013. I also won the All African Junior Cross Country in 2013 and the
National MTB Half Marathon Series in 2013, so my technical skills helped me a
lot.

The best part of the race for me was definitely the MTB part. It was slippery
and muddy, but loads of fun! The worst part was on the climb in the last run, I
tripped and fell. At the end I was speechless, as I really didn’t think that I
would even podium, let alone win. That, plus all the support from the crowd,
was rather overwhelming. The organisation of the race was very good. I had a
little issue at registration, but that was easily fixed and the rest was smooth
sailing. I will definitely be back. I loved every minute of this new
discipline.

I knew that Jessica stood a very good chance of winning it, as she is
the SA and African Duathlon Champ, but I would never have thought that I could
also win. And that amazement still carries on, with people still congratulating
us on our wins. – Dylan Rebello

According to winner Stuart Marais, he was feeling
broken after a hard week of racing by the time he got to the XTERRA. “The Big 5
Challenge was killing me, so the plan was to kill it on the first run and then
just survive on the bike. Kevin Evans caught me about 5km into the bike leg and
coming into the second transition he had about a three-minute lead on me. I
felt good and managed to catch him on the last single track section, and winning
was fantastic,” said Stuart, who promised to be back in 2014 and go for his
hat-trick win. Kevin came in second, while Kent Horner finished third.

“With sore legs you can only push so hard,” laughed
women’s winner Carla Van Huyssteen, who was taking part in her first Big 5 Challenge.
“My breathing was really good on the day, but my legs just didn’t want to
respond. I ran really hard on the first run and on the bike my plan was just to
remain constant. Then Candice Neethling caught me at the 14km mark on the bike
leg and entered transition with at least a three-minute lead on me, but I
managed to catch her at the 5km mark of the second run. I pushed as hard as
possible, as I didn’t want her to surprise me later in the run, and I was really
relieved with the win.”