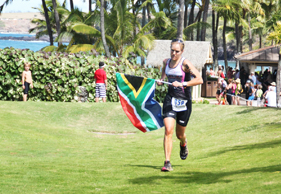 Early in 2012 a group of triathlete friends who were all training for
the Ironman came up with an idea to create more team camaraderie within their
highly individualised sport, to help each other, as well as help to grow the
sport in the Western Cape. The idea was to create a sponsored team of select
multisport athletes to compete as brand ambassadors, and invite athletes who
showed promising results in the various disciplines that make up triathlon, or
who really ‘live’ the multisport brand to the full, to be part of the mix and
create a platform for brand visibility.

With Tiaan Pretorius and Morne van Greunen taking the lead, a group of
17 athletes was selected, and the Dynamic Multisport team was born in October –
but that name was short-lived. “Dynamic Coaching contacted us to say they were
starting a multisport club and wanted to use the name, so we offered to change,
to keep the peace,” quips Tiaan. “Seven of us sat around to decide on a new name,
and since I am putting in a lot of time on the team, we decided to use my
family’s business name, Cape Auto Centre, as our new team name. It’s a bit of a
different sponsorship, as car dealerships normally go into motor sport, not
multisport, but my brother Corne and I like that triathlon is one of the
fastest growing sports in the world, that the triathlon community is vibrant,
and triathletes are courageous, committed, passionate and bold. We feel these
are characteristics we would like our business to be associated with.”

Other sponsors also came on board, like 32Gi, Virgin Active, Quali
Juice, Power Protection Testing and Tuna Brands, and the team members all
signed up to join the New Balance Multisport Club in order to obtain their ASA
and TSA licence numbers. They now compete in team colours whenever possible,
but also in club colours when necessary, and their team kit features all their
sponsors’ and club names.

“Our team is a diverse group of talented athletes who train like professionals,
yet race as amateurs whilst holding down a full time job or studying. The team gives
us the support base that all athletes need, and we feed off each,” says Morne.
“Also, we’re above average athletes, but not at the elite level, so obtaining
sponsorship is that much harder. Now we have a team and thus more presence at
events, so it is easier to approach sponsors.” Tiaan adds that the criteria for
team selection went further than just results. “We chose good athletes that
have a bit of an audience, and we encourage the members to increase their own
profile by not only participating in events, but also to blog about and publicise
their racing – if you can have a result and an audience, it’s a win-win.”

The team also decided to work towards a worthy cause, so they chose SCAS
(Sport for Christ Action South Africa) as their official charity. “Each team
member is responsible for raising funds through friends, colleagues, etc., and
we will do a cheque handover at the end of the triathlon season, just after
Ironman,” says Tiaan. “Next season we’re thinking of getting involved in the development
side of the sport, such as sponsoring young kids from disadvantaged communities
to introduce them to multisport.”

Looking ahead, Tiaan says they don’t have plans to grow the team for
now, but instead want to focus more attention on supporting the members who
have the potential to compete internationally. “Next year the Olympic Distance
Triathlon World Champs are in London, which would be a cheaper trip than to New
Zealand, so we hope to support our members who qualify. We’re also planning to
put on our own weekend multisport event and of course, get many more podium
finishes.”

For
more on the team, check out www.facebook.com/capeautomultisport.