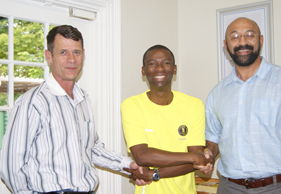 Thirteen years ago, in 2000, East Coast Radio (ECR) presenter Makhosi
Khoza tackled his first Comrades Marathon when he decided to enter the race on
the spur of the moment. But on race day, things did not go as he had hoped. “My
ITB got worse at Drummond and I was literally walking my way to the finish,
until I got stopped at the cut-off at Lion’s Park.” That was Makhosi’s Comrades
dream gone – and he never went back. But this year he vows to be back AND to
cross the finish line!

Makhosi, who has been in the radio industry for the last 21 years and
says there is no job like it, started running at university, because it seemed
fun, and a great way to brave a cold shower afterwards. Since then he has continued
running on and off. In preparation for the Comrades in 2000, he entered his
first race, the Hillcrest Marathon, and describes the whole event as a bit of a
blur. “It was relatively easy, notwithstanding the sharp pain in my knee, which
was later diagnosed as ITB. It still plagues me to this day!”

Running coach and mentor Norrie Williamson helped Makhosi prepare for that
first Comrades and Makhosi describes this process as Norrie having to ‘hold his
hand’ throughout his race preparation! It was therefore even more disappointing
that he never made it to the finish. Still, over the years Makhosi kept on
running, but only decided now to go back to the race that beat him 13 years
ago. He is still battling with ITB and is currently being treated for it, but
hopes to resume training with some beach runs along Durban’s Golden Mile soon.

Though he has demanding working hours, Makhosi says he doesn’t find it
hard to fit in time for training and usually trains after work, as he says he is
not much of a morning person. He prefers training alone and is still looking
around for a club to join, but is really looking forward to the Big C. “I am
more excited about Comrades than you can imagine!” And I realise that the
biggest hurdle to success at Comrades is not a physical one, but a mental
battle.” He adds that his passion for running stems from the fact that it is a
sport for everyone, does not require any fancy facilities or great expenses,
and that one can run anywhere.

For now, Makhosi just hopes to finish the race, but if all goes well, he
would like to finish within 10 hours, and his inspiration is simple: “I did not
complete my first Comrades, so I’m hoping to do it now 13 years later!”