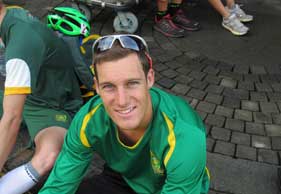 It all started as a ‘career
move’ in the investment field, but soon turned into a career move in a totally
different direction. “When I started at STANLIB in
2009, I was 24 and had never done a triathlon, but my boss was doing the
Ironman 70.3 and I thought it would be good to spend time with the big man,”
jokes Travis. Little did he know then he was about to launch a multisport
career that could see him get to the 2016 Rio Olympics!

“I did some more training and then came my big
breakthrough, making the Gauteng Duathlon team for the SA Champs, where I
finished third in the 20-24 age category and made the SA team for the World
Champs. There I came seventh in my category and 33rd overall, out of
750 competitors, and when I got back, I decided this is what I want to do,
because since I was a kid I wanted
to represent my country, and if possible race at the Olympics. So I made the
decision to resign at the beginning of 2010, so that I could follow my dream.”

However, that was not the end of Travis’ stay at
STANLIB. Having accepted his resignation as a stock and investment broker, the
company then asked him to start up and manage the STANLIB Sports Club. The company’s thinking
was that sport has the ability to unite a company and break down inter-departmental
barriers, by building relationships and bonds amongst employees at all levels.
Also, healthy employees are more productive and driven.

“It was a great opportunity for me, as I wasn’t making that much money from
triathlon, and the new job allowed me to work flexi-time and train while still
earning a salary,” says Travis. “Now I go in to the office three times a
week for a few hours and work from home the rest of the time, which allows me
good balance between full-time training and still being able to work, stimulate
my mind and stay in the corporate world.”

Travis explains that the
Club has about 200 active members taking part in boot camps, Pilates, netball,
soccer, running, fitness competitions, corporate sporting events and cycling,
and he also interacts with many more of the 600-plus employees about their
personal fitness and nutrition goals. “I think being a ‘regular’ employee
initially, and knowing many people within the company, has allowed me to link
with all departments and employees, and have an understanding of life at
STANLIB and what is needed from a sport and wellness side to improve the health
of the employees and create a better environment to work,” says Travis.

With time to focus on his training, Travis has posted some
terrific results since turning pro in 2010. That first year he won the All
Africa Triathlon Champs and was third at the All Africa Duathlon Champs, and
made the SA teams for both Triathlon and Duathlon World Champs. In 2011 he was
crowned SA Duathlon Champion, placed first in his category at Ironman 70.3 SA,
and won the 5150 Bela Bela Triathlon, thus becoming the first SA athlete to
qualify for the 5150 Hyvee Final in the USA in 2012. That year he also retained
his SA title, plus added second at African Duathlon Champs, third at SA Triathlon
Champs and fourth at African Triathlon Champs. Added to that, he qualified for
the top level World Triathlon Series event in Madrid.

Looking ahead, Travis has his sights firmly set on Rio
2016. “That Olympic dream is what it’s all about, and I resigned in the first
place to give myself that chance. The qualifying period starts in June 2014,
and I am feeling confident, although I need to improve my swim to compete with
the best in the world,” he says. “I do miss the vibe and excitement of the
financial world, but I don’t miss the pressure and stress, and I have no
regrets about making the change. Being able to do what I love most in sport,
while trying to build the company from a wellness perspective, is a much better
balance for me.”