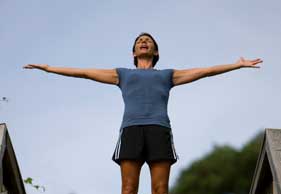 Next time
you go on a long run or ride with your training partners, or participate in a
race, take note of the chatter around you and you’ll probably hear one or more
of the following things: “I just couldn’t keep up with the bunch… I just can’t
seem to hit my goal time… My mind wasn’t in the right place today.” This could
even be you talking – and if so, don’t feel bad, because many athletes struggle
to improve their speed and their times, or find it hard to maintain motivation
for training, or battle a fear of pain, or even a fear of something specific to
their sport, like open water swimming. Most of these issues are associated with
the mind – that little voice that says, “I can’t, I am tired, I need to walk,”
or worse, “I am going to bail.”

The good
news is that hypnotherapy has proven to have a therapeutic effect, creating a
breakthrough for many athletes to get past the barrier created in the mind,
says hypnotherapist Arthur Long, managing director of The International Academy
of Hypnosis. He has 47 years of hypnosis and hypnotherapy experience and runs
his own practice in Fourways, Johannesburg, called Hypnotherapy-SA. He first
saw the wonderful results of hypnosis in treating stroke victims and bypassing
damaged neural pathways in people who had suffered back damage. Later he met
the hypnotherapist working with the highly successful Australian Olympic team,
who introduced him to sports therapies, which Art has subsequently used when working
with numerous athletes, including numerous Olympians, and helped 11 athletes reach
world champion status.

Arthur claims
that an athlete’s motivation and drive can be destroyed by having the wrong
coach or getting the wrong training advice or feedback on performance, because
people relive words without realising it, and often they remember bad remarks
in particular. “This causes unrealistic restrictions in the brain and once an
athlete has branded themselves with the ‘I can’t’ label, they seldom overcome
that. Everything you think affects every atom of your brain, and the brain can
add to a problem and make things worse, but hypnotherapy helps athletes to
break the bad agreements they have formed in their minds, which are inevitably
holding them back, and to control competition nerves, deal with competition
conditions, and push themselves to a higher performance.”

Arthur also
says that an athlete could have an issue at home or at work that causes them to
under-perform, as their mind is not on the race. “Hypnotherapy can help the
athlete to divide situations and leave the work and home troubles aside while concentrating
on the race at hand.” He also says the mind power of a typical Comrades runner
is incredible, and it is because they deal with the moment at hand, many who
struggle are struggling due to previous programming in the mind.

WHAT YOU CAN EXPECT

Hypnotherapy
sessions for athletes usually last 90 minutes. The first 40 minutes are spent discussing
what you feel are your weak points or problems, followed by 40 minutes in which
the hypnotherapist will change your thought process to alter the way you have
been thinking, which can sometimes be deeply engrained in the mind, in order to
make a breakthrough. Arthur says he purely uses words in his practice, to
override the negativity in the subconscious, and it all depends on the athlete
as to how many sessions are needed.

Arthur
claims that many athletes who underachieve have experienced an unpleasant event
in their earlier years, but he doesn’t believe in rehashing the past. Instead, he
teaches the subconscious to let go and thus creates a strong confidence in the
athlete that cannot be created on the surface of the mind. “The effect this
process has on the athlete is incredible. A weight lifts from their shoulders
and they go into a state of utter relaxation, and that is when the performance
picks up dramatically. Words can either make or break an athlete,” he concludes.