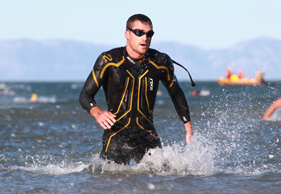 Many
people consider triathlon to be the flagship of multisport, but for some
endurance junkies, three disciplines apparently just isn’t a big enough
challenge… and so it was that the Stellenbosch-based team at Stillwater Sport
& Entertainment dreamt up an even bigger challenge, with seven disciplines!
Held in the second week of January each year, the Totalsports Challenge comprises a 12km surf ski paddle, 1.5km swim,
50km road bike, 13km road run, 13km canoe paddle, 25km mountain bike and 9km
beach run, with separate categories for individual athletes and teams of two,
three or seven. In recent years the organising team added the Terra Firma race
to the event, comprising the four biking and running ‘land’ legs only.

Going into the race, a big battle was expected between
defending champ Dan Hugo and last year’s runner-up Stuart Marais, and what a
race it turned out to be. Unfortunately, due to windy early morning conditions
in Gordon’s Bay, the surf ski leg had to be cancelled, and the swim was
shortened to 1km, which possibly had quite an effect on the final results. Dan exited
the swim with a narrow lead and held it through the road bike, but then Stuart made
his move on the road run, going into the canoe leg in first place. Dan caught
and passed Stuart near the end of the paddle and led through the mountain bike
leg to take a lead of just under two minutes into the beach run, but Stuart
then dug deep into his reserves and passed Dan shortly after the halfway mark, going
on to win in 5:13:30, just under three minutes ahead.

After the race, Stuart admitted that the
cancellation of the surf ski leg had probably been to his advantage, as Dan is
stronger in this leg and he had expected Dan to have a bigger lead early in the
race. Nevertheless, he was still over the moon at winning: “I didn’t know
whether I should laugh or cry. It was rough going, with Dan going out super
hard. He is by far the toughest oke I’ve ever had to race against and this is
definitely my biggest career win.”

Jeannie Bomford marked her return to the Totalsports
Challenge after becoming a mother with a well-deserved win in the women’s individual
race, crossing the line in 6:33:54 and describing making a comeback as tough. “The
last time that I competed here was in 2009, and since them I’ve had two
children. The event has definitely grown, with loads of new faces now
competing, and the Totalsports Challenge is just that, a real challenge. I love
all the disciplines – it just makes life so much more exciting.” Bradley Weiss
took gold in the individual men’s category of the Terra Firma in 4:02:26, while
Colleen De Oliveira was victorious in the individual women’s category in 5:27:27.

DOING IT FOR
BURRY

In the build-up to the 2013 event, a fair amount of
media coverage was given to the Terra Firma challenge between Team Stoltz,
consisting of four-time XTERRA triathlon world champion Conrad ‘Caveman’ Stoltz
and his wife, former SA Netbal captain Liezel Stoltz, versus Team Velocity
Cycle Lab, consisting of multiple ultra-marathon winner Ryan Sandes and his
partner, Vanessa Haywood, who is best known for her modelling and TV
appearances, but is now also an accomplished rider. However, following the
tragic death of Burry Stander in December, Conrad was determined to race as
hard as he could in memory of his friend, and from then on there was only going
to be one winning team, not only in this celeb duel, but in the mixed pairs
category overall.

“Liezel and I decided to race
for Burry, and instead of towing everyone from Gordon’s Bay to Kleinmond, I
wanted to arrive at the first handover alone, like Burry did three years ago,”
says Conrad. “Still raw from Burry’s funeral, I rode to Gordon’s Bay
filled with emotion, warmed up like I would for a big TT race, and got to the
start simmering. I tried to do Burry justice by finishing alone, but Louis
Bressler and Bradley Weiss were with me at the finish – I just didn’t have
enough ‘wors power’ to do ‘The Kid’ justice. I left it all out there
nonetheless. Liezel then did her part as well, blitzing the 13km road run, and her
BMT kicked in on the 9km beach run as she ran her toes blood blisters to ensure
we won for Burry.”

One of the funniest aspects of the Totalsports
Challenge is the weird and wonderful team names, and this year’s event once
again dished up its fair share, like Jaded Candy, Rustproof, Cheesy Challenge, Lake
Snakes, Fire Breathing Rubber Duckies, Timone & Pumba, The Last Mayans,
Come Sias at the Lucky Draw, 3 Musketeers & a Hobbit, and Wii Not Fit.

For some teams, it is a ‘family affair,’ hence names
like Mammas and Pappas, Mommy Divas, The Better Halves, and Me & My
Mother-in-Law, and when it came to the gender wars, the Powerpuff Girls and
Chicks Rule teams were pitted against the Working Boys. Also mixing it up were
6 Men & a Lady, Three Ladies & a Bloke, and Cool Chicks & Hot Guys.

An event like the Totalsports Challenge requires a lot
of planning, whether you enter as an individual or as part of a team. With six
transitions along the way, you either need a personal second to meet you at
each transition with the necessary kit for the next leg, as well as your eats
and drinks, or you need to arrange for your next relay team member to be there
for the handover. Now and again, team members or seconds don’t quite get their
timing right, leaving the incoming athlete scouring the transition area and
asking the announcer to call missing people to report for duty.

Spare a thought for Team Podium. Entered in the Mixed
Trips category, their road cyclist came into transition just ahead of the
second team in the category, but their runner was stuck in traffic and a
frustrated rider had to stand around for ages waiting for her. She eventually
got there, but the leaders were long gone. To their credit, Team Podium fought
their way back to second in their category and still finished on the podium,
but next year this team will probably do things a bit differently!