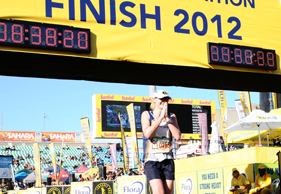 In
2009, one of Debbie’s running friends challenged her to do Ironman South
Africa, after he had done it, and she knew that she couldn’t let the challenge
slide. So in 2010 she lined up in Nelson Mandela Bay and came home with a 12:56 finish… and a newfound passion
as well. “In December 2009 I entered and I gave myself four months to
train. My speciality then was
cycling, but I had only ever run two half marathons. As for swimming, I’m not a
sea person,” she says. “My
first marathon was actually at Ironman 2010 and I realised from there that
running was something I loved doing – hence all the ultras I’ve done since
then! There’s just something about running that is more challenging than
cycling. My friends think I’m crazy but I get into a bubble when I run – nobody
can get in and I feel so refreshed afterwards.”

Now
with the Sunninghill Striders Running Club from Johannesburg, Debbie will be doing
her first Old Mutual Two Oceans Marathon in March and then will be going for a second
consecutive sub-9:00 Comrades Marathon finish in June. She ran 9:26:51 in her
first Big C in 2011, and then followed that up with an 8:39:19 last year –
clearly a very talented runner on road, but it is on the trails that she really
shines. She grabbed a second placing in the last year’s 70km Umgeni River Run,
finishing in 9:25:35, as well as third place in the 2012 Salomon Skyrun with a
time of 25 hours and 26 minutes. The Puffer is another event on her must-do
list each year.

Debbie
has a helter-skelter routine, balancing her work as a sales rep for Roxy and DC
Clothing with a strict training programme on top of the figure skating coaching
and spinning classes she leads. But for this talented and dedicated runner, “no
time to workout” is a bad excuse. “You have 24 hours in your day – you can definitely
find the time,” she says. “I have often used that excuse, because it’s an easy
way out, but you can make a choice to train!”

She
dedicates two days a week for an hour-and-a-half run, while weekends are set
out for longer runs, and her training programme also includes spinning four
hours a week as well as fitting in a gym programme compiled by Jeppe’s Mike
Kirby, focused on leg, core and upper body strength. “Mike’s programme is tough,
but he gets you mentally prepared for a race, helping you focus on your goal
and supporting you all the way.” She also makes sure that her diet will give
her the nutrients and ‘oomph’ to get her through her week, “It plays an
important role, because your body gets no energy if you don’t eat right,” she
says, adding that she always sticks to her ‘everything in moderation’ tip, “but
it’s hard, because I love food!”

Debbie
has been figure skating since she was six years old and has coached the sport
for the past 13 years. Just like her
running bubble, she says she skates to feel free, and to express herself and
her emotions. She has always lived an active lifestyle, but says her
running has really paid off out on the ice, and the two actually compliment
each other. “Skating has given me the base of my
leg and my core strength, including giving me that competitive outlook to the
sport. In turn, running is improving my leg strength and I have found my
skating is a lot stronger than before I ran!”

She
also agrees that balance on the ice helps her when she is out on the trails,
which is the type of running she most enjoys. “It’s definitely more interesting
when you have to run and jump through streams and over rocks. It challenges you
a little bit more and fellow runners hurry to help you out,” she says. “I think
trail running is more sociable than road running at times.” That said, Debbie
doesn’t hang around to socialise when she is in racing mode, as can be seen from
her fantastic results. “Another really great thing about my running is that I
have my parents supporting me at many of the races. They’ll make an effort to
be there to watch me run, and that support goes a long way.”