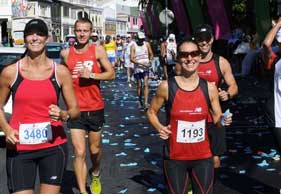 When
Keaton Quarmby lines up at Cape Point on 24 August for the Puffer, she will be
undertaking her longest race to date. She has 10 marathons and the 2012 Old
Mutual Two Oceans under her belt, and has participated in the three-day
ProNutro AfricanX Trail Run four times, but this will be a significant step up
for her. Still, she reckons she’s ready, and is actually looking beyond the Puffer
already. “I really enjoy the longer ultra-distance races, so I’ll be running
Puffer, then AfricanX again, and then, with New Balance now involved in the Comrades,
I plan to run it myself in the next few years,” says Keaton.

At
the beginning of July, it was announced that New Balance will be the new
footwear and apparel sponsor to Comrades from 2014 to 2017, and in her role as
Marketing Manager for the SA branch of the 107-year-old US company, Keaton is a
key player in the deal. “New Balance has a long history in the sport of running, but
we’re very excited
about this sponsorship, as we think it is really going to take our brand to
another level! That will include launching our Comrades shoe early next year,”
she says.

Born and
educated in Cape Town, Keaton (31) comes from a running family. Both her
parents ran marathons and her brother Laine Alexander is an elite-class runner.
Keaton, however, was focused on ballet and modern dancing for most of her formative
years, so only got into running later. “I did a bit of cross-country at school,
but it was only in 2006 that I got into serious running.” Since then she’s gone
from 10km social runner to ultra-marathoner, and Getting married to Warren in
February this year has seen her running improve still more. “He’s not only my
husband, he’s my running partner,” says Keaton. “When I finish work, I meet him
on the trails for a run, and on weekends we do our long runs together. I’ve
done the AfricanX with four other running partners, but next year I’ll be
running with Warren, so I’m really looking forward to that.

Keaton
has been with New Balance SA for nearly 10 years and says she loves the great
working atmosphere and people she works with. “We have a great family vibe in the
company, and we all regularly take part in events, then get to share our war
stories and have a good laugh.” A perk of the job is international travel, and
Keaton has not only run the Boston Marathon twice, while visiting the American
head office, but has also run in New York, Miami, London, Singapore and Hong
Kong. “When I travel, I’m usually tied up in conferences all day, but our team
always make sure we get out for a run.”

Fitting it
all in is the secret to running success, concludes Keaton. “I work hard and
smart, like getting to the office early so that I can leave at normal time and
meet Warren for an evening run. Running keeps me in a positive, strong frame of
mind, and it’s a great stress-reliever, but best of all is the time with Warren,
as well as my family and colleagues.