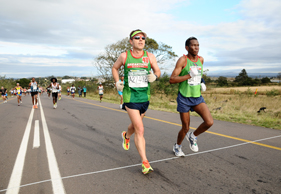 Leon Baker did not think much of the medical tests he had to undergo for
a life insurance policy. In fact, the day he did the test started out like all
the other days: No exercise, eating another greasy take-out and lounging in
front of the TV. But then came the call that changed his life: His broker
informed him there would be a loading on his insurance policy as his
cholesterol was too high and he carried too much weight. Leon was shocked.

“It was not the extra money that bothered me, it was the fact that
somebody else thought my health was so bad that they had to charge me extra for
a policy. I was 33 at the time and saw the loading as completely ridiculous. I
saw red and asked for the test to be redone in three months. My broker laughed,
but agreed.” That very night Leon was out the door and started walking around
the block. “My first walk was 3.6km and every day I kept on walking. Gradually
it got a bit easier and I got a bit quicker. I was worried about my weight, but
that wasn’t the key factor… I was more worried about my health.”

At his heaviest in 2003, Leon weighed 97kg. Before that he was fairly
active at school and varsity and dabbled in alternative sports such as martial
arts and underwater hockey. “I was never fat, but it always looked like I could
lose a kilo or two.” However, Leon’s weight spiralled out of control when he
started working, because he was a young father trying to support his family and
also still studying. This meant the little sport he was doing was the first
thing that went out the door. “I ate a lot while sitting in front of the TV!”

Leon was uncomfortable and did not sleep well. He had bad indigestion
and felt miserable, but never to the point where he wanted to change his
lifestyle. “Once I got on a bike and cycled 3km. It took me a week to recover
and I thought I am definitely not doing that again!”

After the call from his broker, Leon started improving his diet by
making very simple changes, such as cutting out all junk food, reducing
carbohydrates and even buying smaller dinner plates to eat off. He lost about
10kg in two months, but that was too much, too soon, and his immune system
crashed, resulting in him suffering from flu and colds quite often. “That was a
difficult time, and the closest I came to giving up on the whole thing. I could
not understand how I could live a healthy life, but suddenly get sick.”
Fortunately this passed and by the end of 2004, Leon was back running again.

And then the bug bit. In April 2005 he finished his first 10km race in
57:13. “I was finished, but all I could think about was doing it faster the
next time around.” Leon had discovered his competitive side and participated in
more 10km races, always trying to run faster. “I was inexperienced and believed
every run had to be faster. This eventually led to injury.” To compensate, Leon
started swimming and cycling, which eventually saw him taking part in his first
sprint triathlon as well. As his injury cleared, he moved up to half marathons,
a distance he immediately fell in love with. He joined Breakthru Midrand
Striders and soon entered the 2008 Two Oceans Ultra Marathon, finishing in a
respectable 5:10. At the same time, Leon’s 21km times started coming down to an
impressive sub-1:30 and by 2010 his weight was down to 77kg.

Leon says that peer pressure from club mates led to his first Comrades
in 2009, but he crossed the line in 8:48. “The most amazing part was running
down Fields Hill with about 20km to go and realising that I was going to make
it. Up to that point I did not believe it.” His running has since improved still
more and he includes gym work, core strength, time trials, speed intervals and
long runs in his programme. These days he is even a regular podium finisher in
his age category, and has now run four consecutive Comrades, clocking 8:19 (2010),
8:23 (2011) and a very impressive silver medal time of 7:25 last year.

Leon’s main aim this year is to break seven hours at Comrades and get
his 10km down to sub-35 minutes, his 21km time under 80, and his marathon time
to sub-2:50. He believes he is not a naturally fast runner, but that his good
lung capacity from years of underwater hockey contributes to his success. He also
believes that running is a journey you need to discover yourself. “When
non-sportspeople see how exhausted runners are, they feel sorry for us, but
they don’t realise how alive running makes us feel.”

Leon’s family is involved in sport and both his kids, Jennifer (17) and
Dylan (13) run. In fact, Jennifer was the second junior home at the recent
Dis-Chem Half Marathon. “When your children are involved with you in sport, the
whole family is more connected,” says Leon, who now weighs a healthy 67kg, a
whopping 30kg less than at his heaviest. Though he makes sure he eats healthily,
he is not fanatical about it. “I do have pizza or chocolate from time to time,
but definitely limit my intake. The best way to think of food is as fuel. Then
you see it differently.”

Leon’s biggest goal now is to see how fast he can go. “I have exceeded
all expectations I had of myself, or that anyone else had of me. Every time I
go faster, I get more motivated. I will never go back to the fat guy in the
pictures. That is not me. When I don’t exercise, I can feel my quality of life
dropping. I believe potential is limitless, and as long as I can hold on to
that idea, I can’t see any reason I should get slower. I am going to run the
rest of my life.”

“Leon is an inspiration to many and has
achieved his goals through dedication and hard training. His enthusiasm for
running is contagious. The harder he trains, the more he enjoys the sport, and
this love of running is what motivates those around him and draws fellow club
members to persevere. I am one of many runners who has benefited from Leon’s
commitment to the sport and I am truly thankful to him for all of his time,
advice and motivation.” – Caroline
Wostmann, former Breakthru Midrand Striders member, friend and training
partner, now part of the Nedbank Dream team.

“When I met Leon about five years ago at
a race in Pretoria, he was rather ‘porky’ and I easily beat him. Over the past
few years, he has caught up with me and passed me! He has achieved so much and
is an inspiration to me. He has shown me what is possible with focus and
dedication. Thanks, Leon, for your passion and your friendship. I hope you
continue to achieve the ambitious goals you set for yourself!”- Duane Newman, chairman of Breakthru Midrand
Striders and friend of Leon.