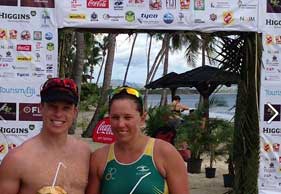 When I met Mel in June 2012, I was
still riding high from completing my first Ironman in Western Australia the
previous December, and she was in full stride and ready to head to Spain for
the 2012 ITU Long Distance World Championships. Training for triathlon with
your partner has many rewards. Our time in the pool, on the bike or out for a
run is really time that we are spending together and with our friends.

Sitting around with Mel and a few
friends after a bit of a disappointing performance at a triathlon in February,
I asked a mate what the average age grouper should do in order to post faster
race results. His words: “The only way you are going to get faster racing is to
race more.” Soaking up his advice, Mel and I sat down and picked 10 long
distance triathlons. After a couple of Olympic distance races our long-distance
season was to begin in Fiji.

Upon arriving on the island for the inaugural Fiji International Triathlon, we were greeted by very warm and humid weather. What
surprised me the most was that everyone knew about the race, from the taxi
driver, to the resort staff, and even the guys behind the bar in the .

It is true that ‘Fiji Time’ really does
exist in Fiji. Start times are really a suggestion for most things, but this
relaxed nature is a refreshing change and makes for a stress-free life. This is
no more evident than when out cycling on the roads. The drivers are courteous
and happy to wait behind you or stop and let you cross traffic.

Race day arrived and we were again greeted
with warm temperatures. The swim was a two-lap course, finishing with a run up
stairs toward transition. I exited the water near the front and Adrian exited
not too far behind, the slightly elongated swim course not playing to his
strengths. The bike was a picturesque three-lap course. The support was
amazing. Coming off the bike as the second female, I was feeling good! A
four-lap run course around the Golf club provided a nice mix of road running
and soft grass for some relief for the legs. To say it was a hot run is an
understatement!

When Adrian came running by me with 2km to
go, I was in the lead for the women’s race and purposefully didn’t look behind
me until the last aid station, as I knew, swimming being my strength, that the
runners behind would be catching me. No-one was more surprised than me when I
crossed the line and got to hold up the finisher’s banner, a once in a lifetime
experience! I was greeted at the finish by Adrian and it was really nice to
share that experience with him.

Since
competing in Fiji, Mel and Adrian have both managed to earn spots to the 70.3
World Championships in Las Vegas, USA on 8 September.