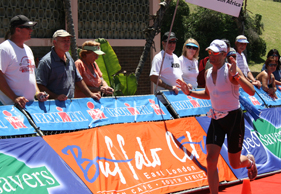 There’s
nothing like a new challenge to get Clive Chowles going: “It’s nice to try something
you don’t know about,” he says. “For example, I knew nothing about canoeing and
got into a boat and was wobbling around. I remember completing a 2km leg
without falling out and an expert told me I would never be ready to compete in
the Duzi in a few months, but I got there!”

With
a runner-up finish in the World Duathlon Championships in 1997 and a win in
1999, Clive went on to win the Powerman in 2001, grabbed an 11th
placing in Ironman South Africa in 2005, finished the Duzi Canoe Marathon and completed
the ABSA Cape Epic. And he achieved all that while working full-time in the
sport retail market, first with New Balance for 12 years, then helping Inov-8
to put their first range together for SA, and more recently by relaunching the
Brooks running footwear and apparel brand in South Africa through his SBR
(SwimBikeRun) Agency, which he runs with his wife Michelle.

“We
wanted to find an alternative running brand where there was a huge demand in
the country,” he explains, “and we wanted Brooks so much that I flew out to
Germany a few times to meet with HQ.” Clive is very proud of what they have
already achieved, and is committed to the brand. “Brooks is a brand for runners
by runners,” he explains. “It’s not only for the elite runner who’ll win
Comrades, but for the guy who is starting out. In the next few years, I hope Brooks
will dominate in speciality running stores and retain the ‘run happy’
experience the brand brings.”

“I
never take a rest day,” says Clive, “my family and work depict my rest.
Sometimes you miss a session with a meeting running late, but I have a
structure I try and stick to.” This structure is training every day, from 15km
morning runs at 4:30am to 3km swim sessions and three-hour bike rides. Weekends
are dedicated to events or five-hour long rides while he fits in a three-hour
run on Sundays. And with his first ever Comrades Marathon coming up, the more
training the merrier.

Having
grown up with a running background, Clive made various SA schools athletics and
cross-country teams as well as provincial spots at club level. After his stint in
the army, he came back with a new interest in duathlon, and after his world
championship win, Clive decided to take his training and competing more
seriously, including entering several international races. “It was always great
to target a few races elsewhere, especially during South Africa’s winter
season. I’ve also enjoyed a few Ironman competitions over the years… I targeted
just under nine hours at Ironman and with 8km to go I
remember running into a spectator and getting cramp, then missing out with a 9:02.
It was still amazing though!”

IF THE SHOE FITS…

After
his three-hour morning ride, Clive is welcomed home by Michelle and his
two-year-old daughter Hannah. “I can’t wait to get back from a ride and see
them. Hannah is also at gym and events with her bike, and I want to imprint
that active lifestyle from an early age. It’s also great working together with
Michelle, and we have very defined roles: I do sales and liaise with the
company in Germany, while she does the marketing and operations side.”

For
Clive and his team, there is an active culture in the company, and even
Michelle is now training for her first 5km while Clive aspires to a silver
medal at this year’s Comrades. “I’m not intimidated by the distance and length
of time, but it’s physically harder than Ironman,” he says. “But at the start
line, we’re all fit and ready – it’s who’ll stick it out mentally in the end.”
Clive would also like to go back to Ironman South Africa next year and says he will
push for other goals as well. “One can always make time to train and compete.
You can have all the money in the world, but without your health, you have
nothing. Time will be available if you really want it.”