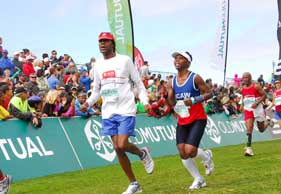 After initially
going well in this year’s hot and humid Comrades Marathon, Malusi ‘Richard’ Monisi’s
race plan became seriously derailed. Having first run the Comrades in 2004 and
with eight medals already to his name, Richard was forced to a grinding stop
when the heat got the better of his guide. “She collapsed due to dehydration
and I stayed by her for an hour,” he says. “I felt so bad and waited before
taking out my cane and continuing.”

Yes, you did
read that correctly. He just took out his cane and carried on with race,
clocking an unbelievable 9:57:10, despite barely being able to make out what
was happening around him, and while also worrying about his guide in between
worrying about the cut-off. But Richard says his only goal was to get to the finish
before the 12-hour gun, and tick off another ultra. “I’ve been dealing with
this a few times in my life, where I have to ‘see’ the route with my cane. It’s
a fold-up, and it’s always by my side.”

Born in
Limpopo, Richard moved to
20 years ago in search of a job. After walking into Gerald Fox’s shop asking
for money, Richard was introduced to running. “Gerald told me I looked fit and
that I could probably do sports,” explains Richard. “That was in 1997 and I
started running. After six months, I entered my first ever race, The Tough One,
and I struggled! Gerald was there looking after me.” In that challenging 32km,
Richard finished in 2:55 and vowed to improve, so he joined Rockies Road
Runners and says he received amazing support from the very beginning. “They got
me kit and a race number, and they helped me where they could – and still do
today!”

Despite only
being able to see about two metres and barely make out shapes, Richard took to
running naturally, and after a few years of shorter races, where he always
received great support, he found himself lining up for his first Comrades in
2004. The record books say he finished in 10:45, but interestingly, Richard
thinks it was a lot slower. “I just just made
it. I think it was 11:50-something. I learnt a lot from that and a year later I
finished in 8:45! I get a lot of support on the road – from runners and
spectators. They think I struggle because I am a blind man and think it’s
wonderful what I’m doing. I hope many are inspired by me.”

Today,
Richard is a well-known figure at Comrades, which he has now run nine times,
and at the Two Oceans, where he has eight medals. While he may not see the
beauty of , he says he can feel the
energy of the
classic. “I get very excited in ! I feel myself and every being of me there.” He
has managed a 4:54 finish at Oceans and also deems the Soweto Marathon, his ‘hometown
race,’ a special event that is always a must on his calendar.

Richard has
always struggled to find a sponsor to cover decent running shoes and travelling
expenses, but somehow has always found the means over the years. “I’ve always
held the belief that if I think it and pray, it will happen. I dreamt about
Comrades and Oceans, and I prayed for it, and God gave me the means, despite it
being expensive!” For Richard, nothing seems out of reach, and running is his
outlet to forget about hardship or stress. “It can be a cure for almost
anything! For young runners, for inspiring runners, there needs to be a
desire,” Richard explains. “If you think you can run like Bruce Fordyce, then
you can! When I think of Bruce, I think I can do the same, and run despite my
disability!”

Every day
Richard spends his time at the ‘Service for the Blind’ building in Industria
West in Jo’burg, loading trucks with boxes for retailers and packing goodie
bags for countless running and cycling events in Gauteng for Monica Childa
Marketing. “Monica found us and helped us back in 2005,” he explains. “We are
given an opportunity to be helpful in society and this has given a lot of work
to the blind community!” After work, Richard does three 10km training runs a
week, before dedicating his Sundays to a local race or long five-hour run. He
says that running, alongside his love of gospel music, is his go-to for relaxation
and having fun.

Despite
everything he has achieved already, Richard says he still has more dreams he
would like to fulfil in the sport he loves. “I got to Oceans. I got to
Comrades. Now, I dream of running the and

marathons. That would be amazing! That is my future, and maybe I can find a way
there with a little help one day.”

Richard
feels that it is important to recognise disabled runners for the love they hold,
just as much as able athletes, for lacing up, and even more so for inspiring
the everyday runner. “Some of us struggle to enjoy the sport because of having no
sponsors, but we run because we are in love with the sport! Perhaps races need
to make specific categories for disabled athletes as an incentive. This will
also give us support in the future.”