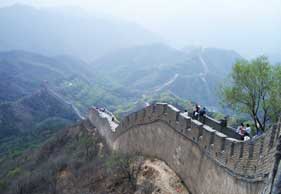 The
Great Wall of China is one of the man-made wonders of the world and a
world-renowned tourist destination, and each May it plays host to the Great
Wall Marathon, of which half the distance is run on the Wall itself, including
over 5100 steps! However, that is just a small ‘tourist section’ of the Wall,
which stretches for over 4200km across China – and only two runners are known
to have ever run the full length. That was back in 2006, and it was done by
SA’s David Grier and Braam Malherbe.

Now
another South African, 40-year-old former fashion designer and creative
director Alister ‘Dream Wilder’ Koeresies, plans to run on the Wall in an
effort to raise funds to pay for school sport and playground facilities and
equipment, as well as computers, for the underprivileged kids of the
Masiphumelele township near Fish Hoek in Cape Town. “I’ve been training for a
year for this trip, doing up to 60km a day, so mentally and physically I feel I
am ready,” says Alister. “Now I’m busy lining up my support crew, because I
will need some ‘crazies’ to go with me!”

Alister
was a talented middle-distance runner at school, later moving up to long
distances and running the Old Mutual Two Oceans Marathon in 1996, clocking an
impressive 4:36:57. He ran it again in 1999, but then took an extended break
from running. “I started again in 2011, ran another Oceans, then decided last
year to run a marathon every few weeks for five months in order to raise money
for the kids. It was the first time I had done anything like that… before that
I had been a business executive, but having separated from my life partner, I
decided to refresh myself, because I felt I had become stagnant.”

And
so, from April to August, Alister ran the Two Oceans, then based himself in the
UK to run the London Marathon, Cork Marathon (Ireland), Defi Mountain Marathon (Switzerland),
Midnight Sun Marathon (Norway), Stockholm Marathon (Sweden), Davos
Ultra-marathon (79.4km, Switzerland) and the Poeti Cinque Terra Marathon (47km,
Italy). “Some I ran unofficially as charity runs, but others I took seriously,
including finishing eighth at Defi and 13th in the Cinque Terra. It
was a really taxing experience, because I hitchhiked and ran to get to many of
the races, but I raised about R40 000 in sponsored gear donations for the kids.”

Next
Alister decided it was time to pursue one of his all-time ambitions, to visit
the Great Wall of China, and what better way than on the run? “I’ve always been
fascinated by Eastern philosophy, and when I went to Hong Kong at age 22, my
interest was piqued by a silk robe I saw on sale, which led to me becoming
interested in the old silk trade routes. That in turn led me to the Great Wall
of China, and I’ve always wanted to see it. I came across a Chinese quote that
says, ‘To be a great man, you have to stand on the Great Wall.’ Next year I
will fulfil that dream.”

However,
Alister realised that the language and culture barriers will make the trip even
harder than it already is, so in June he flew to China for a month of
fact-finding, planning, networking and training, while also taking in as much
Chinese culture as he could. This included training with various martial arts
masters. “I have no martial arts background; it was more about learning about
my inner strength and energy.” Strangely enough, the one thing he didn’t do was
visit the Great Wall. “I had to be disciplined about not ‘opening my Christmas
present’ early, because I want the Wall to be a surprise when I get there next
year.”

March
is still a long way off, so in the meantime Alister has jetted off to Europe again
for a few months of training. This includes training in the Italian Alps, running
the Davos and Cinque Terra races again, and running the 800km Camino de Santiago
Pilgrim’s Trail in Spain. “I’ll just see how my legs feel and take it one day
at a time,” he says.