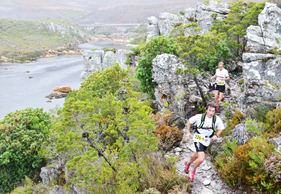 With
more and more trail races being added to the calendar, and more runners hitting
the trails, there is a school of thought that South Africa needs a national
trail running body so that the sport can be run efficiently and safely, and the
athletes can benefit from a formalised structure. However, one of the things
that makes trail running so enjoyable is the freedom it offers – no club
colours, no licence numbers, and none of the rules and regulations of road
running – and that is something many trail runners and event organisers want to
retain.

Athletics
South Africa President James Evans has gone on record to say that ASA does not
want to impose strict rules and regulations on trail running, but does want a
national trail running body established and affiliated to ASA somehow, so that our
world class trail runners can be included in international competition, since
these competition structures only deal with national athletic federations.
Therefore, ASA recently convened a sub-committee to look into all aspects of
this formalisation process, and asked well-known Western Cape race commentator
and avid trail runner Altus Schreuder to chair the committee.

“ASA
is largely hands off – the trail running community can decide what we want, and
my job is to drive the process, not the outcome” says Altus. “I have tried to
contact as many people as possible in all the provinces to include them in the discussion,
including every trail race organiser I could find, and most agree that it is
unavoidable that there must be a national structure. I’m also finding that all
the athletes are positive about structures being put in place, because it will
give them more opportunities and will see them looked after better.”

Altus
explains that the committee is currently working on three main areas of the
sport:

1. National structure – “It’s the most contentious aspect and also the one that differs the
most from region to region. The Western Cape has over 40% of all SA trail
races and most are well established, so the organisers and runners are
generally satisfied and therefore more concerned that a national body will come
in and change things. The other regions tend to want more structure and support
at this stage. Overall,
the
trail community is anti-clubs, licences, etc, and the whole concept of freedom
is very important to them. From an ASA point of view, I can go on record to say
that clubs and licences will not be an issue. ASA is OK with that.”

2. Safety and Environment – “These proposals will cover the non-negotiable aspects of safety of
runners and protection of the environment, but without adding more ‘red tape’ that will
interfere with the individuality of runners and events, or the entrepreneurial
spirit of organisers. Most experienced organisers are doing this already and
will not be impacted by this.”

3. Fixtures list, national champs and teams – “This is by far the most urgent, since we
need to be up and running in 2013 in order to send athletes to the various
World Champs events. We have just sent out various proposed policy
documents on how we are going to select teams using champs events and a points
systems, and how to select events for SA Champs, using criteria like distance,
profile, and time of year, since our champs must be just the right time before
a world champs event in order for our athletes to prepare properly. We have
also sent out a bidding document for organisers to apply to host champs
events.”

In the meantime, the Trail Committee
has already selected the Addo Elephant Trail Run 76km on 2 March in the Eastern
Cape as the first South African Ultra Trail Championships, where a team of
three men and three women will be selected for the IAU World Trail Champs
(50-80km) in Wales. “With
the World Champs in July, we need a national championships roughly in March,
and the Addo is the only event that fits the bill in terms of timing, distance
and profile,” says Altus. After that, further SA Champs events will be
selected from bidding events for the long distance (35-45km) and mountain
running (8-10km for women; 10-13km
for men) categories.

Added
to that, a points system will also come into play where all athletes in all
trail events will score points according to a detailed system that takes into
account distance, terrain, gradient, etc, and their best three performances
over a 12-month period will also count towards a wild card selection for
national teams, in case they cannot attend an SA Champs event, or have a bad
run at these champs.

To
find out more about the proposed future of trail running, mail Altus on
altus@capewinelab.com.